Her birthday is also the day she passed away!

35 years old should be a time for many people to enjoy their lives, but for Chan Mei San, it wasn’t that case. She suffered from blood cancer since young and had to undergo regular blood transfusions. Despite having the need of getting monthly blood transfusions, she managed to survive for more than 30 years.

Mei San from Manong, a small town in Kuala Kangsar, Perak, was a frequent visitor to the hospital since she was a child. In the 1970s and 1980s, when the transportation was not developed, her parents went through a lot of hardship to bring her from the remote small town they were staying to the hospital every month for her monthly blood transfusions and treatment.

Mei San also went through many times of chemotherapy. It wasn’t a pleasant journey and she had been through many difficulties along the way. Although life wasn’t easy, but with the support, company and encouragement of her parents and sisters, she managed to overcome the challenges in her life.

About a month ago, Mei San fell at home, and her neck developed an abscess out of a sudden. When she was admitted to the hospital for emergency treatment, the doctor discovered that there was another abscess in her liver, and the abscess had burst and caused infection. Before she passed away, she experienced abdominal pain, she vomited blood and there was purulent discharge from her ears. Her mother, who is in her 60s, and her sisters were at a loss, they couldn’t help her or share her pain. They could only watch her suffering in pain.

After fighting for her life for nearly a month, Mei San passed away on October 25. That day was also her birthday. Her two elder sisters grieved as they lost their sister, and at the same time, they were worried about the funeral expenses.

Her 41-year-old sister, Cham Mei Ting found One Hope Charity through a friend in Johor. She was worried at first that her application for assistance would not be approved due to the long distance. When she got to know that One Hope Charity was ready to provide them with funeral and burial assistances, the sister called their mother immediately to tell her not to worry too much about the funeral expenses. The news finally relived the burden of the family.

Due to financial constraints, Mei San’s sisters originally planned to send her for cremation directly after claiming her body. However, her mother was too reluctant and hoped that they could conduct a three-day wake at their home, so that she could have enough time to mourn the loss of her beloved daughter and bid goodbye.

During the home visit by One Hope Charity’s volunteers, her two elder sisters recalled the life of Mei San. They were full of guilt and sadness for her. They cried and all their emotions were expressed through their tears while telling the life story of their sister. After understanding the plight of the family, One Hope Charity decided to help by bearing the cost of the funeral, cremation and columbarium slot.

The deceased, Mei San is the third child among the five siblings. Her 41-year-old eldest sister was a tailor with three children. She had lost her job for more than a year and she blamed herself for not being able to afford the daily expenses of her mother and sisters. Her 39-year-old second sister works in a restaurant. She is a single mother with two children. She is the person who pays for the living expenses of her mother, sisters and grandfather. Her 33-year-old brother transports vegetables in Cameron Highlands. He has three children. Her 28-year-old sister is also a blood cancer patient who needs monthly blood transfusions to continue survive.

One Hope Charity has been providing funeral and burial assistances to poor families. As long as a family fulfilled the qualifications, One Hope Charity will take charge of the funeral expenses so that the family members of the deceased can send off their loved ones without having to worry too much.

One Hope Charity also has a programme called “Promise of the Last Journey”, where elders without relatives can register with the organisation for their funeral arrangements in the future. One Hope Charity will conduct the funeral based on the applicants’ last wish.

Thanks to our generous donors for your donations as it would help One Hope Charity to provide more funeral and burial assistances to poor families and lonely elders. Those who wish to donate could do so anytime as this is a long-term aid provided for the needy.

If you wish to donate for the funeral & burial, please click HERE. Thank you 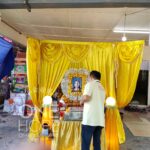