81-year-old elderly mother and 64-year-old son were admitted to a same nursing home for the elderly with the help of the public recently. A few days ago, the son died of an illness in the hospital, and One Hope Charity came forward to provide him with free coffin, as well as to deal with his funeral.

64-year-old son Cheah Tiong Gee was very weak and was unable to eat since early July. He died one week after being sent to the hospital due to breathing difficulties. One Hope Charity provided him with free coffin and paid for the funeral expenses. The proper arrangement comforted the elderly mother and she hoped that her son could free from all suffering and have a happy afterlife.

81-year-old mother Goh Saw Choo and her 64-year-old son Tiong Gee from Butterworth, were having mobility problems after they suffered a stroke and a fall. Both of them were admitted to a nursing home for the elderly, and One Hope Charity managed to raise RM60,000 to pay for the cost of the nursing home for two and a half years.

Tiong Gee suffered from breathing difficulties recently, and he was sent to the hospital for emergency rescue. The nursing home called the ambulance through his family member to send him to the emergency department, and Tiong Gee was relying on breathing aid to survive. On 16 July, he passed away in the hospital after struggling for a week.

His sister said that her mother was sad and was once worried about the funeral expenses. However, she felt grateful and deeply comforted when she knew that One Hope Charity stepped in to provide help and help in handling the funeral matters.

On another note, One Hope Charity also arranged the mother, Saw Choo to go for blood and health test during the Health Carnival last month (in June). The report showed that everything was normal. Her family is grateful that One Hope Charity not only takes care of the mother’s daily life but also concern about her health condition. 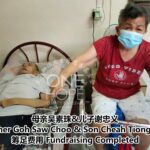 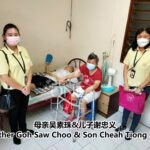 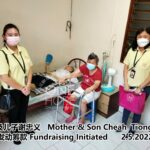