Chuah Say Teong, who lives in Bukit Mertajam, had his first stroke in 2014. At that time, his elder brother took him for acupuncture and his condition gradually improved. Unexpectedly, he suffered a second stroke in March 2020. The MCO caused him was unable to continue acupuncture this year. In June, his condition began to deteriorate. His feet were not able to stand up, and could only lie in bed all the time as well as needed the care by the family members.

On 10th December, ONE HOPE CHARITY team sent an electric hospital bed, mattress and pillows to Chuah Say Teong to provide him a comfortable place temporarily. At the same time, local state assemblywoman will assist in arranging medical officer to visit him for two doses of vaccine. 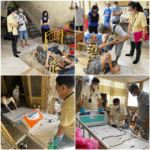