In April, One Hope Charity helped the younger daughter so that she could undergo a surgery to remove tumours in her neck; and recently, the elder daughter had gastrointestinal problems and needed medical examination. The single mother was deeply touched by the kind deeds from generous individuals which enabled One Hope Charity to help her two daughters successively.

“Thank you One Hope Charity and all the generous individuals for your help. When I was extremely helpless, you extended a helping hand to me and my daughter twice.”

The single parent family was not well-to-do. The daughters fell ill one after another, and the mother needed to prepare a huge sum of money for her daughter’s surgery and medical examination. The distraught single mother was unable to afford the medical expenses, hence, she approached One Hope Charity for help. Within half a year, One Hope Charity approved the assistance needed by the sisters of this single parent family twice, so that they could undergo surgery and medical examination in time. The assistance had relieved the burdens of the worried mother and made her smile.

Jeyaletchumi A/P Murugaiah, an Indian single mother from Penang Island, divorced her husband 16 years ago. Her 18-year-old youngest daughter Shangkari A/P Gunalan was found to have small lumps in her neck two years ago, and the lumps eventually grew into a tumour.

As the tumour getting bigger, the mother brought her daughter to the hospital for examination. The report showed that there were two tumours of about 4cm in her thyroid gland. The doctor suggested her to remove the tumours to avoid her condition from getting worse. However, the mother was worried as she could not afford the RM15,000 surgical fee.

At that time, the mother had borrowed over RM5,000 from her friends and relatives, but she was still short of over RM10,000. She was helpless, hence, she approached One Hope Charity for help.

After the home visit, One Hope Charity confirmed that the single parent family was not well-to-do. The single mother is a confinement nanny and a masseuse. However, due to the pandemic situation, she has no client for a long time. The mother and daughters has been relying on government aids to cover their living expenses. Therefore, One Hope Charity approved her application then. Her daughter undergone her surgery one April 28, and everything went smoothly. Her daughter recovered and was allowed to discharged from the hospital after the observation period.

Just when she thought that her family could resume their normal life after the successful surgery, her 26-year-old eldest daughter Karthiyani A/P Gunalan had faced medical issues. Her stool contained blood, and she had burning sensation in her stomach and esophagus when she was eating. In the end, she could only eat semi-solid food.

She had seen many doctors but the doctors at the clinics only prescribed her with gastrointestinal medicines, which did not help to improve her condition. Lastly, a doctor advised her to perform an endoscopy as soon as possible because her stool was green in colour at that time. The doctor then suspected that her intestines might be injured and having serious ulcers, and her condition could only be confirmed through an endoscopy which cost about RM4,000. The medical fee was a heavy burden for the single mother who has not worked for a long time. Therefore, she approached One Hope once again for help.

After learning about her condition, One Hope Charity conducted another round of home visit and later approved the endoscopy fee for the elder daughter. After undergoing endoscopy, it was good to know that although there were ulcers and injuries on Karthiyani’s intestinal tract, but it could be cured by medicine, and she did not need to undergo a surgery.

Their mother Jeyaletchumi is very grateful to One Hope Charity for helping her children twice. She said that without the assistance from One Hope Charity and the donations from the public, it would be impossible for her to afford the medical expenses of her two daughters. She was also surprised that One Hope Charity could approved her applications twice in just a few months.

The mother and daughters are the beneficiaries of One Hope Charity’s food basket programme. Jeyaletchumi stressed that all the help given to the family during pandemic really touched them, and it also reduced the burden of the family. 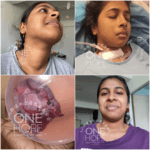