They were forced to have their limbs amputated due to various factors. They were depressed after the amputation. ONE HOPE CHARITY utilise the public fund to customize 4 prosthetic limbs to help them stand up and regain a new life.

The prosthetic beneficiaries are Bun Ah Meng (64), Lim Weng Yau (59), Lim Fook Loy (53) and Suresh A/L P Ramiah (44). They were amputated due to different factors. ONE HOPE CHARITY review and approved the prosthetic application, then proceed customized prosthesis for them.

【Bun Ah Meng: After I get used to it, I will return to social work】

Bun Ah Meng (53) from Bukit Mertajam, was amputated in a car accident 15 years ago. He is single and self-reliant person. He used crutches to works as a dishwasher in a coffee shop.  He relies on the RM300 from Social Welfare Department and his little income for living expenses.

After a long time, he sought prosthetic aid assistance from the ONE HOPE CHARITY. After putting on the custom-made prosthesis, he put plams together to express his gratitude, and hoped that he could move freely.

【Lim Fook Loy: Move freely allows me to return to the workplace】

Lim Fook Loy (64) from Penang, his toes turned black and has been amputated at seven months ago. Then he found pus draining from his foot and eventually forced to amputated until the bottom of right knee.

When he was young, he ran his own business, and later became a real estate agent due to sickness. He deeply grateful for the prosthetic assistance provided by ONE HOPE CHARITY, and hope that after the prosthesis is installed, he can return to the workplace.

Lim who is from Seberang Perai Selatan lose his lower limb due to amputation caused by diabetes.

Now he is learning to walk again and aiming to walk without any support from other people.

【Suresh:I will return to work to feed my family】

Suresh A/L P Ramiah (44) from prai  who had the amputation 9 months ago due to diabetes received an artificial limbs offered by ONE HOPE CHARITY.

Previously he was a cleaner at a local bank. With the artificial limbs, he wish that he can return to work soonest possible to feed his families. 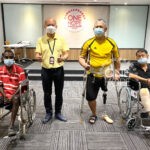