Many people faced difficult times during the implementation of the movement control order (MCO). ONE HOPE CHARITY’s office was also closed for services from June to September 20. However, One Hope Charity had received 195 applications for assistances in the past six months through alternative channels.

The applicants had different needs. As long as they met the qualifications, ONE HOPE CHARITY will assist, where ONE HOPE CHARITY had approved 147 applications with various types of needs such as medical expenses, breathing aids, beds and wheelchairs, physiotherapy and acupuncture fees, relocating lonely elderly in nursing homes, dialysis fees, medication fees, cataract surgery, low-amount surgical fees, prosthetics, among others. The total aids amounted to RM243,470.96 (did not include fundraising cases).

Normally, for those assistance requests that is less than RM20,000, ONE HOPE CHARITY will not initiate fundraising, but the organisation will use the general donations from the public to provide immediate assistances to patients or the people in need. The cost of special needs milk formula, diaper, acupuncture and physiotherapy fee that cost less than RM100, or few hundred ringgits of medication fee, and others might be just a small amount to some people, but this is a heavy burden for a patient and their entire family. Therefore, the assistances can help to ease the financial burden of the families in need.

From May to October this year, ONE HOPE CHARITY had received 195 requests for help in the past six months. 147 applications were approved. All the applicants faced financial difficulties, and ONE HOPE CHARITY provided assistances only after we reviewed the case.

(1) A 43-year-old Chinese man The Chun Keong, who often felt dizzy, fever and weakness in his right hand and left foot. He could not find the cause at all after seeking medical treatments for five years. The doctor suggested him to undergo a genetic examination. ONE HOPE CHARITY helped him by paying the RM1,054 examination fee.

(2) a 42-year-old factory bus driver, Singaravelu a/l Menandy, had a fever and bacterial infection that caused various other diseases. His kidney suddenly failed and needed to undergo dialysis; he is paralysed and needed some milk formula and diapers. His 39-year-old wife and three children aged between seven and 13 were helpless. ONE HOPE CHARITY provided him with the milk formula, diapers and some dry food. One Hope Charity also provided the three children with a tablet so that they can continue with their online classes.

(3) 36-year-old Samsuzirani Bin Mat Ripin and his wife are visually impaired. Both of them worked as massage therapist but their incomes were badly affected due to MCO. The wife fell at home, and the couple has two children, aged four and two, that need to be taken care of. ONE HOPE CHARITY provided assistance based on their needs of dry food, milk formula, as well as adult and children diapers.

(4) A two-year-old girl with congenital heart disease. The girl, Nur Alya Alisha bt Azizan, had been arranged to undergo heart surgery at the National Heart Institute (IJN). However, the operation fee is still short of RM10,000, parent approached ONE HOPE CHARITY to help them with the shortfall of RM10,000.

(5) A 45-year-old man Ang Guan Soon, who suffered from varicose veins since young. Two years ago, his left hamstring began to twist and he suffered from tendon rupture. His condition deteriorated to the point where he could not walk. He needed to undergo a surgery and laser to remove the bumpy hamstring. He could not afford the RM15,000 surgical fee, therefore, One Hope Charity decided to help him.

(6) 54-year-old patient Sabri Bin Ahmad developed a high fever when he was three months old, causing brain damage and he is unable to speak and walk. He can only lie in bed. His 77-year-old mother takes care of him, and his siblings support his living and medical expenses. As the patient has been bed ridden for a long time, he had a wound in his back. One Hope Charity loaned a bed to the patient based on the need. 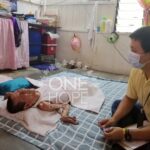 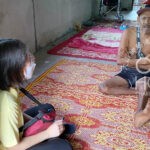