He is disabled since young, he needs to wear diapers all his life, and he can’t walk stably. However, he did not give up and tried to live a normal life. One Hope Charity provides him with special insoles to help him walk steadily, hoping that he will continue to stay strong.

17-year-old Thor Yee Hwang from Balik Pulau suffered from Sacral Myelomeningocele (Spina Bifida) with Hydrocephalus since his birth. Soon after he was born, he underwent two surgeries to implant catheter in his brain to drain the excessive fluid in his head. He was also diagnosed with permanent urinary and fecal incontinence, so he needs to wear diapers for the rest of his life.

As his nerves were pressed to his spine, and his feet were deformed, he can’t walk stably or stand properly. His body will lean backwards. However, with the special customized insoles, he is able to walk steadily.

He only started to learn walking when he was four years old, and he needed foot orthoses to support and stabilise his feet. As he grows up, his body also grown, and his insoles need to be replaced in time. However, this special customized insoles cost nearly RM1,000. For a family that is not well-to-do, purchasing of the special insoles is a heavy burden.

Yee Hwang’s parents approached One Hope Charity for help. After the home visit, One Hope Charity decided to assist him by providing the special insoles, so that the teenager can continue his studies and lives a normal life.

Yee Hwang’s 57-year-old father Thor Eng Soon said that his son’s feet are soft. If Yee Hwang stands still without moving will cause the body to lose balance and the centre of gravity, so he walks on tiptoes. The doctor said that the teenager needs special insoles for fixation and support. Four years ago, his special insoles were sponsored by a generous individual, but now, he has grown up and the size of the old insoles has become too small. Therefore, a replacement is needed.

Thor Eng Soon worked as a supervisor in a factory when he was young. As he needed to take care of his son such as to take him to and from the school and help him to carry his school bags, he decided to quit his job to become a stay-at-home father. At the same time, he started to become a farmer, which enables him to earn over RM1,000 a month. However, a recent flood destroyed nearly half of his crops, and he has not been harvesting since March. Hence, his income has been greatly affected.

His 49-year-old mother Lim Ah Hiok works as a nightshift staff in a grocery store, earning RM900 a month. The couple also has a 22-year-old daughter, who has just graduated from Tunku Abdul Rahman College in accounting and currently unemployed, and a 15-year-old son. The parents are grateful for the assistance of One Hope Charity, so that their son can continue to live a normal life. 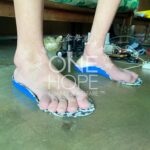