Thank you, everyone, my daughter had an operation and is now discharged from the hospital, returning to Johor in a healthy state.

Mico Wong En Qi, a 3-year-old girl has delayed her heart surgery due to her family financial problem. With the help of kindhearted people, she underwent heart surgery and recovered.

One Hope Charity, after reviewing her condition, believes that she must undergo surgery as soon as possible. Hence, the fundraising activity started on October 5th, and she was admitted to the hospital on the same day for surgery the next day.

She underwent surgery on October 6th and was observed in the ICU for 3 days. Later, she was transferred to the general ward after her condition improved. Her father can also take care of her by the side.

She was discharged from hospital on October 11 and returned to Johor with her father. She will return to the hospital on October 19 for the stitches to be removed, and she will still need regular follow-up visits thereafter. Her father thanked all the kind people who helped them overcome their difficulties. 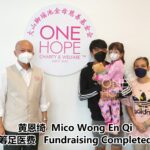 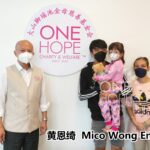 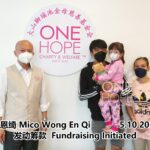