“Thank you for donating without regard for race to save our baby. We are very touched.”

Baby Muhammad Nur Irfan Bin Nizam from Penang Island was found to have heart problem when his mother was six months pregnant. His mother gave birth to him on October 1 and was diagnosed with serious heart disease. He was rushed to the newborn intensive care unit (NICU) right after he was born, and he is still unable to return home.

Since the launching of the fundraising recently, One Hope Charity had received donations from many well-wishers. And now, the donation is sufficient and One Hope Charity is actively helping in the arrangement of the baby boy’s surgery.

Muhammad Nur Irfan Bin Nizam’s parents hoped that they can express their gratitude to all well-wishers who offered help without regard for race and religion through One Hope Charity. 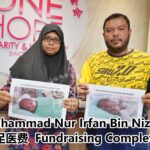 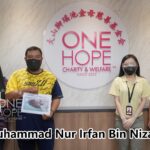