He said that after receiving the tax exemption status, all the donations from the generous donors will be given tax exemption if donors fulfill the conditions as stated.

Dato’ Chua Sui Hau announced the news during a press conference in the morning in One Hope Charity’s service centre.

Dato’ Chua shared that he went to Putrajaya to take the documents of approval to understand further about the process of tax exemption.

He said that One Hope Charity receives tax exemption status under Act 1967, Section 44(6). It is stated that taxpayer who performed donations for charity & welfare will be given tax relief by using the tax exemption receipts provided.

He added that according to the guidelines provided, donors are required to provide details such as IC number, full name, address, contact number etc.

He encourages donors to perform donations through One Hope Charity’s official website & mobile app. Details required are compulsory and the official receipts will be provided immediately after donations. The tax exemption receipts will be mailed to the registered address of donors. Hence, accurate details must be provided to avoid errors. One Hope Charity will not make any amendments.

“No matter if you are donating online or offline, a temporary tax exemption receipts will be given. After checking, the official receipts will be mailed to the registered address within 60 days. 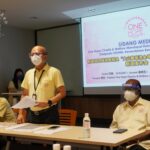