The baby, with the size of a palm needs to be incubated for 160 days and in need of RM1.2 million for the medical expenses.

Exciting news! Baby girl Eloise Ang Xuan Rui, who was born a micro-preemie, has now discharged from the hospital.

Eloise Ang was just the size of a palm when she was born. She has shown the tenacity of life and has grown up as a healthy baby. And now, she does not need to be placed in the incubator, and is allowed to discharge and reunite with her family.

Do you still remember the girl who was born in Singapore at just 24 weeks gestation in February this year? The newborn was placed in the incubator at the intensive care unit for observation and treatment, and she needed a huge amount of medical fee. One Hope Charity had launched a fundraising campaign on February 28 to raise RM1.2mil for her, and the amount was successfully raised in just 29 hours.

At that time, the life-saving campaign not only attracted the attention of well-wishers from Malaysia and Singapore but also the concern from well-wishers from all over the world. Everyone had contributed to save the small life.

After nearly five months, One Hope Charity & Welfare chairman Chua Sui Hau brought everyone the good news through a press statement. Baby Eloise who was just palm-size when she was born has grown up to be a chubby baby. The doctor has also allowed her to be discharged from the hospital.

【RM1,200,000 were successfully raised within 29 hours thanks to the generous society】

Baby Eloise was born on February 22 this year in Singapore at only 670 grams. She was just the size of an adult’s palm and her skin was red that seemed to be transparent. She needed to be well taken care of, and needed to be monitored at all times.

With the blessings and generous donations from well-wishes all over world, the huge amount of medical fee, amounting to RM1.2mil was successfully raised within 29 hours; and her 32-year-old father Ang Theam Seah and 29-year-old mother Koh Pei Ying did not need to worry about the medical expenses and let their newborn to be observed in the incubator in Singapore.

To express their gratitude towards the public and well-wishers, the young parents recorded a special video earlier to thank the public for their donations, blessings and prayers so that baby Eloise could grow up healthily in the incubator.

In nearly five months, her parents have been constantly in contact with One Hope Charity’s chairman and his team in charge of baby Eloise’s case. They also frequently updated the team on the growing progress of baby Eloise.

Ang Theam Seah said that Eloise’s milk intake is increasing and her weight is also picking up at a positive pace. She is also gaining back her health.

“Other than that, she is healthy and gaining back her health.

“On June 26, baby Eloise weighed 3.825kg. She drank 75ml of milk every three hours. Doctor told us to get ready to bring her home soon. Hence, we travelled frequently between the hospital and the high commission office to apply for baby Eloise’s Malaysian passport so that we could return to Malaysia soon after she discharged from the hospital,” he said.

After several examinations, on July 8, doctor confirmed that baby Eloise’s condition was suitable for discharge. Her parents were overjoyed. Before she was discharged, the hospital also prepared some props for the family to take pictures.

From a over 600 grams palm-sized baby, Eloise is now a 4kg chubby little girl, and 50.5cm tall. The new parents were always looking forward to bringing baby Eloise home, and now, their dreams finally come true.

Although they faced some issues during the passport application due to the pandemic, and they are still unable to return to Malaysia, but they believe that they could return to their homeland very soon after completing the procedures.

One Hope Charity, baby Eloise’s parents and relatives once again thank all the well-wishers for their generous donations that helped the young life to get a chance to grow up healthily.

Part 3： Parents record a video to thanks all the people

Part 4：Irresponsible party stole our photo to cheat for donation

PART 5: Reports - Baby is 17 days old. Her weight is increasing 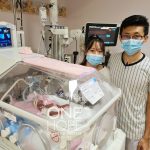 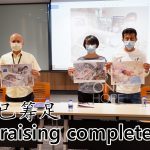 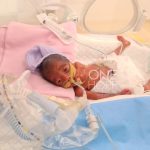 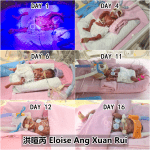 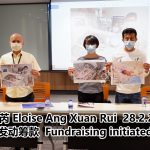 PART 7: Discharged in her parents arms 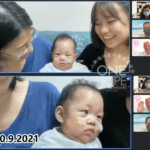