Shannice Ooi, a 10-year-old girl from Alor Setar, Kedah, went to the University of Malaya Hospital with her father the day before yesterday to prepare for a bone marrow transplant. After her father donated bone marrow, Shannice is expected to be observed for 6 to 8 weeks before returning to home.

With the medical expenses of RM88,000 already raised in XX hours, the parents are not only grateful for the assistance from the public, but also hope that Shannice can receive treatment smoothly and return to school as usual.

Shannice Ooi, who has always been small and thin, and seems to be malnourished but she has no serious problems. She went to school as usual like other children and had a happy childhood time. Unexpectedly, she developed a persistent fever after she took the Covid-19 vaccination at the early of the year. Examination showed that the blood platelets were low, and she was diagnosed with Fanconi Anaemia (FA), which is an inherited bone marrow failure syndrome. 39-year-old father Huang Guoquan is willing to donate bone marrow, hoping that his daughter can get rid of the disease. 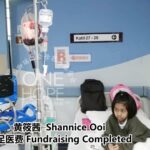 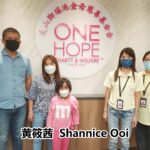