Tan Zhi Ning had undergone a surgery when she was two months old to remove the cyst and then caused hearing loss. The cost of artificial cochlear implantation has raised completely under the help of public. Tan Zhi Ning finally has a chance to walk out of the silent world.

Tan Zhi Ning was found to have cyst in her brain before she was born, and she had undergone a surgery when she was two months old to remove the cyst. When Zhi Ning was seven months old, her parent found she was no response to any sound, then the doctor confirmed that both her ears could not hear. It was a sequelae caused by previous disease – cyst.

The doctor suggested her parents to allow her to wear hearing aids first. However, little Zhi Ning’s hearing has not improved after she wore the hearing aids for many months. Fortunately, after a detailed examination, it was verified that her condition was suitable for implantation of artificial cochlea. However, parents not able to afford the cost of the artificial cochlea for both ears of RM87,000.

After ONE HOPE CHARITY launched a fundraising campaign for Tan Zhi Ning, we received many donations and blessing from the kind-hearted people. Everyone hope the child can be implanted in the cochlea as soon as possible, so that she grows in a healthy, happy and worry-free condition, just like the normal children.

We and the parents are very grateful to all the kind-hearted people for giving Tan Zhi Ning the opportunity to hear the beautiful voice of the world. 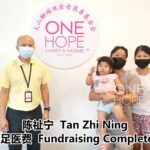 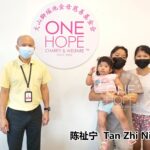