"In addition to working to earn money, I also have to take care of my daughter. After my daughter is implanted with a cochlear implant, I will spend more time taking her to speech therapy and accompany her to learn to speak."

Yeap Yun Xuan, a 7-year-old girl from Nibong Tebal, Penang, was diagnosed with hearing loss at the age of 2 because she could not speak. She has been wearing a hearing aid since then.

Father Yeap Chun Haur said that after seeing a doctor in a specialist hospital a few days ago, the doctor identified that the structure of his daughter's ear is suitable for implanting a cochlear implant, and she is expected to hear sound after turning it on.

Yeap Yun Xuan's RM128,000 cochlear implant and surgery costs have been raised. The father is very grateful that the public can help his daughter live a normal life, and his daughter's surgery date is being scheduled.

When Yun Xuan was two years old, her parents discovered that she could not speak. They brought her to the hospital and the doctor diagnosed her with hard-of-hearing. She has always been well taken care of by her parents. Although she has disability but she is still the only child and the dearest daughter in the eyes of her parents.

The father is not only grateful for the help from the public, but also promises that for the sake of his daughter, he will work hard to make money to support her daughter. 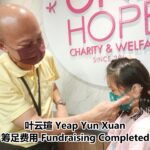 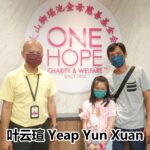