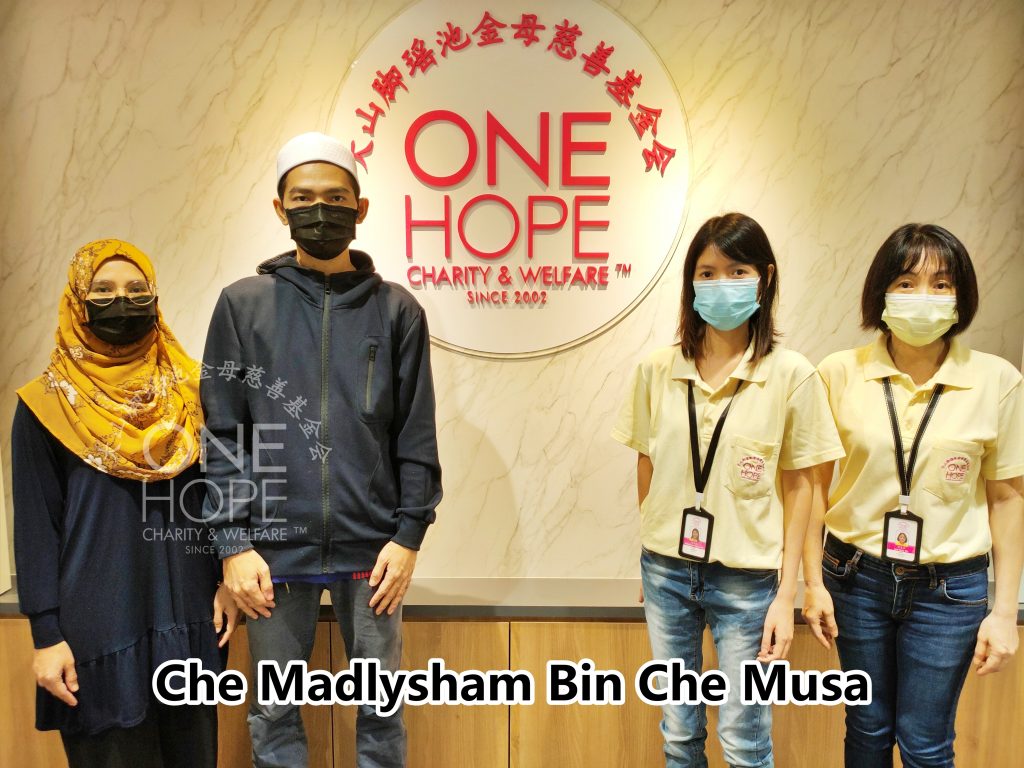 A 38-year-old engineer has a good career and a happy family. He seems to have a good future. Unfortunately, he was diagnosed with blood cancer last year, which was a huge trial to him. Although he has completed six sessions of chemotherapy and stem cell transplantation, the cancer recurred in April this year, which once again dealt a big blow to him and his family.

38-year-old Che Madlysham Bin Che Musa is a father of three. He has a great wife and a stable job. However, the cancer had forced him to quit his job and focus on the treatment. He spent all his family’s savings and hoping that the public could lend him a hand so that he could continue his treatment. He hopes to regain health so that he could watch his children grow.

【He was once depressed and questioned why he has to suffer from cancer, but when he thought of his wife and children who needed him, he knew that he has to be positive to fight against the cancer】

Che Madlysham is a Kelantanese. After completing his degree in mechanical manufacturing at a university in Johor, he works as an engineer for a company in Perai, Penang for 10 years. However, after he was diagnosed with cancer last year and he quitted his job in December last year to focus on the treatment.

At the end of June 2020, he suffered from continuous fever and headache. He didn’t recover after seeking medical treatments for several times, hence, he went to government clinic for examination. The blood test report showed abnormalities, and he was referred to Seberang Jaya Hospital for thorough check. The result revealed that his white blood cell count was low, and he is diagnosed with blood cancer.

The news was something unbelievable to him as he conducted regular exercise, and he took care of his diet. He could not understand why he was diagnosed with cancer, and he once gave up on himself. However, he remembered that he has three young children that need his care, and as a husband and a father, he must be strong. He must fight against cancer for the sake of his wife and children, so that he could watch them grow.

He was immediately referred to Penang Hospital for a series of anti-cancer treatments. From August to December last year, he underwent six courses of chemotherapy. During that period, his brother also donated stem cells, which enabled him to undergo stem cell transplantation in January this year. After that, he started to took immunosuppressant medication.

In April this year, the doctor had avised him to take medication to prevent the recurrence of cancer. However, a box of the medicine cost RM8,580, and he needs to take a box every month for a year.

Che Madlysham was an engineer, earning about RM4,500 a month, and his company took out group insurance plan. After he fell ill, the insurance company compensated him with RM30,000. As he needed long-term chemotherapy, he quitted his job in December last year, and he had finished the money paid by insurance company for treatment.

Currently, he still receives monthly assistance allowance of RM2,300, and the allowance is enough to cover his family’s living expenses. His wife 37-year-old wife Azimah Bt Awang worked part time to make and sell cakes and kuih,  earning about RM1,000 a month. Both of them still have 3 sons, aged 9,7 and 6.

During his treatment period, he relied on the help provided by his relatives and friends, which enabled him to pay for the medication for the first 3 months. However, he could not afford the monthly’s RM8,580 medication fee for the rest of the months, hence, he came forward to seek help from One Hope Charity.

As he would faint suddenly, he is unable to drive anymore. His wife has to drive him to the hospital for follow-up visits and chemotherapy, taking care of him, and at the same time, taking care of their children and her work.

After reviewing the case, One Hope Charity decided to help him to raise the medical fund he needed.