The 78-year-old woman had been suffering from kidney disease for many years and she was diagnosed with kidney failure in February this year. The doctor then told her that she had only three weeks of life, so she started to prepare for her own funeral and signed up for One Hope Charity’s “Promise of the Last Journey” programme. A few days ago, she passed away. One Hope Charity gathered the donations from the public and provided the funeral and burial assistances, so that she could rest in peace.

The elderly woman Chong Hong Thai lived in a flat in Bukit Mertajam with her 41-year-old son. She sought help from One Hope Charity in September last year as she was having a hard life. After a home visit, the voulunteers learned that her eldest son had passed away many years ago, while she youngest son working as an odd-job computer repair technician with unstable income. She had always suffered from kidney disease but she was very self-disciplined. For the past 13 years, she would make sure that what she ate would not harmful to her health.

Volunteers from One Hope Charity often visited her to show care, as well as to provide assistance to her. In February this year, she sought for after death assistances as she was told by the doctor at that time that she had serious kidney failure and might lost her life any time. Therefore, she started to prepare for her own funeral, as well as bidding farewell to her friends and relatives.

Although she faced her death calmly but she did not give up her life. Instead, she actively sought treatment to slow down the rate of her kidney failure, which earned her seven months of life.

A few days ago at around 10pm, the elderly woman had difficulty in breathing. Her son felt something amiss and called the ambulance. However, the medical personnel confirmed her death upon arrival.

The only person the elderly woman worried was her son. But her son followed his mother’s will to authorise One Hope Charity to handle her funeral. Her ashes will be kept at Chang Hua Kor Moral Uplifting Society in Bukit Mertajam after cremation.

One Hope Charity has always been providing funeral and burial assistances to poor and underprivileged families. As long as a family fulfilled the qualifications, One Hope Charity would take charge of the funeral expenses, so that the family could give their loved one a dignified send-off.

One Hope Charity also has a programme called “Promise of the Last Journey”, where elders without relatives could register with the organisation for their funeral arrangements in the future. One Hope Charity would conduct the funeral based on the applicants’ last wish.

Thanks to our generous donors for your donations as it would help One Hope Charity to provide more funeral and burial assistances to poor families and lonely elders. Those who wish to donate could do so anytime as this is a long-term aid provided for the needy.

If there are any poor or needy who could not afford and manage the funeral for their loved ones, or there are any elderly living alone who are interested in registering for the “Promise of the Last Journey” programme, kindly contact One Hope Charity at 016-419 2192, 019-232 2192 or 04-539 9212 for help. 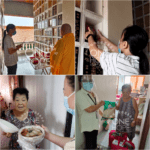