An elderly fisherman who was living alone fainted at home one month ago and was sent to the hospital for treatment. He survived but after discharged from the hospital, he was unable to take care of himself and he put up at his niece’s house temporarily. A few days ago, the old man finally settled down in a nursing home for the elderly with the assistance and arrangement of One Hope Charity.

The unmarried 69-year-old man Tan Seng Hai was a fisherman. After the passing of his mother several years ago, he had been living alone in a flat unit in Butterworth, Penang.

A month ago, the elderly man fainted suddenly at home. Fortunately, his neighbour found out in time and sent him to the hospital. After thorough check, it was confirmed that he fainted due to hydrocephalus. As he could no longer take care of himself, his niece took him home temporarily after he was discharged from the hospital.

However, due to his unstable condition, his niece had to apply leave often to take care of her uncle. They knew that this is not a long-term solution as the niece has to work and earn money to support the family. After getting the consent from her uncle, Seng Hai expressed his willingness to settle down at a nursing home. Hence, she approached One Hope Charity for help.

During the home visitation, One Hope Charity’s volunteers discovered that even though the elderly man was bed ridden but he was aware of his situation. He knew that his niece could not always apply for leave to take care of him, hence, he agreed to move into a nursing home.

He feels that he is blessed. Although he is not married but he has a niece who loves him and care for him.

His niece told the volunteers that she has very good relationship with his uncle since young. Therefore, she decided to take him home to take care of him after he was discharged from the hospital. However, her uncle’s condition was unstable, so she had to take leave very often to take care of him. They knew that this is not a long-term solution, hence, she approached One Hope Charity, hoping that the organisation could help to relocate her uncle in a nursing home, so that she could work and earn a living.

After receiving treatment, Tan Seng Hai can now walk with the support of others. He needs to undergo regular physiotherapy so that he has the chance to recover slowly.

One Hope Charity is grateful to all the generous individuals for your regular donations. Your donations enable us to help those lonely senior citizens to move into nursing homes for the elderly so that they could receive better care. 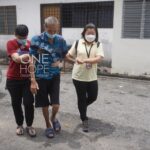