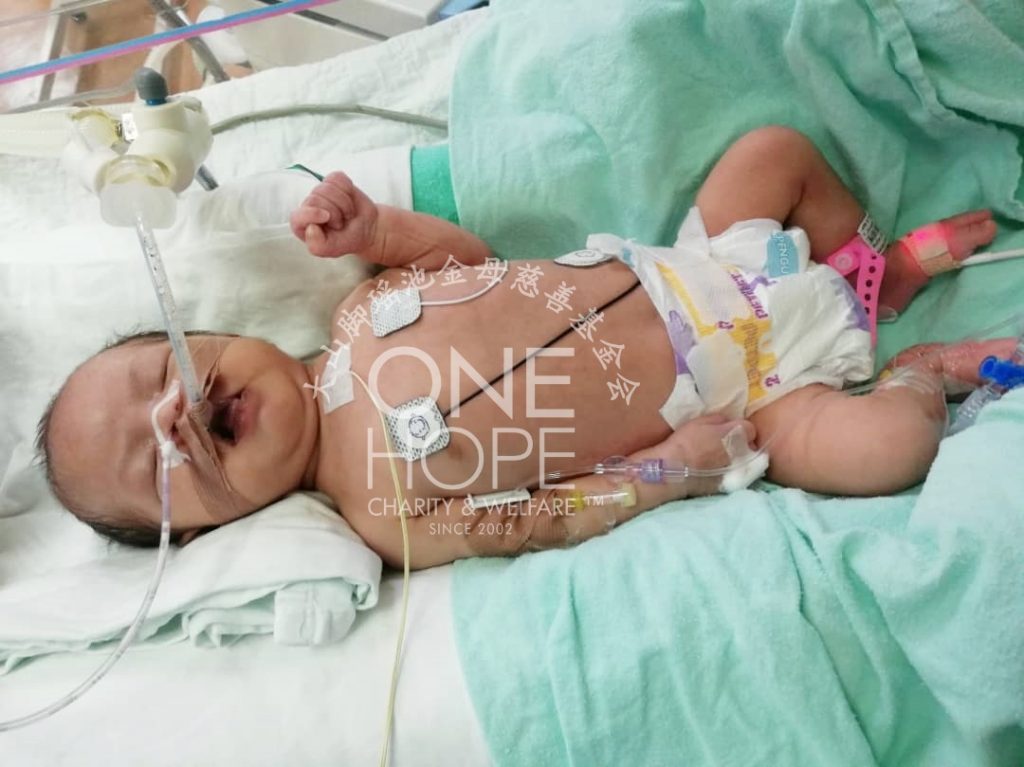 A one-month-old girl suffered from a serious heart disease and has always been in the NICU ward relying on machines to survive. Her medical condition became critical recently due to pulmonary hypertension. The doctor advised that she needs to undergo surgery within three days, so that her life can be saved.

Adawiyah Hanani Binti Mehamad Badrie was born in Kedah on Feb 25 this year. But because she suffered from a serious heart disease, she has been staying in the NICU ward and had to rely on feeding tubes and other machines to keep her alive. A few days ago, she suffered from pulmonary hypertension, putting her in a critical danger. The doctors advised that she needs to undergo the surgery within three days. The cost for the operation is RM90,000, but the family can only bear RM30,000. As for the remaining RM60,000, the family approached One Hope Charity for help in order to save their child.

When Adawiyah Hanani is still in her mother’s womb, neither the mother nor the baby did not have any irregular medical condition, but had a sudden turn of events for the worse during the delivery. The baby did not come out from her head out first during the operation, but rather her legs out instead. Hence, the C-section was performed.

The doctor noticed that the baby’s face loses its colour whenever she cries. After careful examination, it is found that her heart valve was inverted, hence she was referred to a specialist for further examination.

According to the specialist, the baby girl was diagnosed with a serious and complex congenital heart disease. The heart issues include transposition of the great arteries (TGA), associated with a patent foramen ovale (PFO) and a patent ductus arteriosus (PDA).

Yesterday, the baby girl’s condition was in a critical stage due to pulmonary hypertension. The doctor advised that she needs to undergo surgery within three days, otherwise her life could be in great risk.

She requires an urgent life-saving operation called the arterial switch operation (ASO), together with repair of the PFO and PDA. Due to the complexity of the operation, the surgery fee costs RM90,000.

The parents can only bear RM30,000 for the expensive medical fee, while hoping that One Hope Charity could help settle the remaining fee with the support of public donation.

Up until now, the baby girl has always been in the NICU ward and due to the pandemic, the parents can only see their youngest child through the window. We hope that their child can undergo surgery as soon as possible, so that she can return back home and reunite with her family.