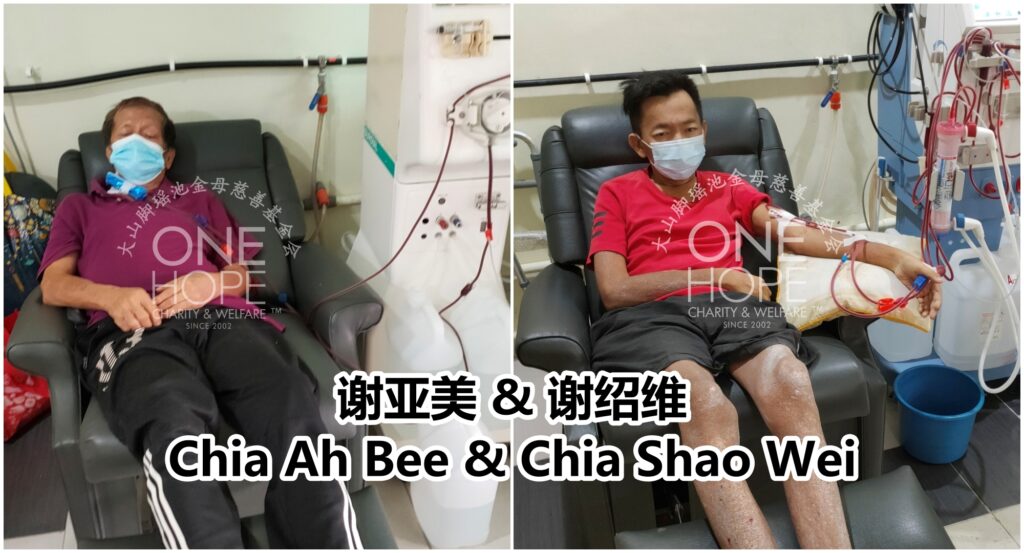 The family is from Butterworth, Penang. The 40-year-old son Chia Shao Wei has been in dialysis for more than 10 years. The 74-year-old father Chia Ah Bee was confirmed by the doctor that he needed dialysis at five years ago. However, due to the consideration of the dialysis cost and the limited financial ability, so he doesn't have go for dialysis, at the same time he tries to improve by diet.

However, during the follow-up consultation at last year, the report showed signs of kidney failure and only dialysis can prolong his life.

【Both the father and son have to undergo kidney dialysis, the family expenses only relies on younger son】

The father and son both suffered from the kidney failure that known as "wealth disease" and were forced to have dialysis for a long time. Fortunately, the son Chia Shao Wei’s dialysis fee covered by Social Security Organisation (SOSCO), but it does not include the erythropoietin injections which cost RM600 a month. The half-blind father Chia Ah Bee’s dialysis fee of RM3000 has to afford by himself.

The father started dialysis a month ago. During this period, the dialysis fees were financed by relatives and friends, but they could not support for long term. The father was blind in his right eye since he was a child, now his only vision is blurred because of cornea problem. He need required to have the cataract surgery and thus he pleads for public helps.

After reviewing the case, One Hope Charity decided to help the Chia family in raising the RM96,160 of 2 years dialysis fee, erythropoietin injection, cataract surgery and living expenses. Hope that within 2 years, they will be worry free of this burden.

Chia Shao Wei, a 40-year-old single man, suffered from blurred vision and fever when he was 25 years old. After a blood test, he found that two kidneys had failed and required to undergo dialysis. Social Security Organisation (SOSCO) support for the dialysis fee, then he needs to pay RM600 a month for erythropoietin injections.

In the past, he rode motorcycle to go dialysis centre. However, he had met a car accident while driving motorcycle go to dialysis, which caused his back and waist had injured and fractured. Although plaster had taken off, his body takes time to heal, so he is currently walking slowly with crutches.

The father, Chia Ah Bee was confirmed by a doctor as needed to perform kidney dialysis at 5 years ago. However, due to financial problems, he managed to last for five years by controlling his diet. In 2008, he suffered a minor stroke and became inflexible in his hands and feet. Unfortunately, he was told that the body toxin was too high at the end of last year. If he did not get kidney dialysis, he was afraid that he would be seriously ill and thus he accepted go for kidney dialysis.

Both father and son need dialysis at every Monday, Wednesday, and Friday, it takes 4 hours. The 35-year-old brother Chia Shao Neng is responsible for transporting his father and brother in and out of the dialysis centre. He was originally a warehouse manager, because he needs to regularly sending his father and brother for dialysis caused he was forced to quit his job. During the Chinese New Year period, he is currently working for Bakkwa part timer to earn a slender income to cover his living expenses.

Chia Shao Neng’s mother was passed away many years ago. The family relied on provident fund for living expenses every month. The second account of the provident fund of the two sons was running out, and thus their living expenses were fall in trouble. They are relying on relatives for the left-over dishes from economic rice stall for their daily meals.