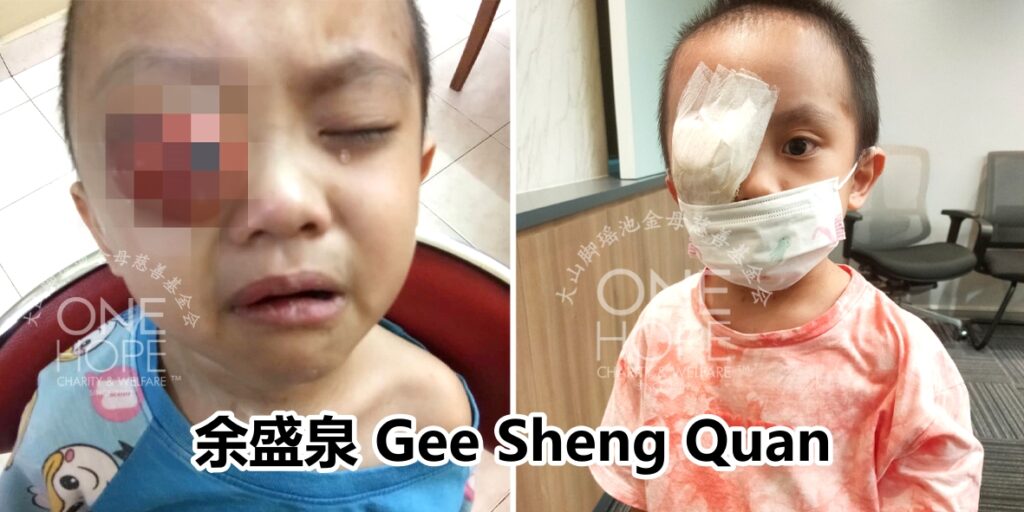 A 6-year-old Chinese boy diagnosed Malignant Peripheral Nerve Sheath Tumor (MPNST) was sentenced to have only 6 months to live after his right eyeball was amputated because he could not undergo chemotherapy like normal cancer patients. The parents did not give up seeking medical advice. There’s always a silver lining, finally they found the suitable medical treatment for the boy, which is they required to go to Taiwan for Proton Therapy.

Gee Sheng Quan (6 years old) from Sungai Petani, Kedah, was diagnosed with Malignant Peripheral Nerve Sheath Tumor (MPNST) in June 2022. According to the doctor, this is the first MPNST rare case in Malaysia. Although the fist sized eyeball has been removed, the boy still must be treated soon to avoid cancer recurrence. Due to the rare case condition, doctor recommended to do Proton Therapy in Taiwan.

【The doctor said that this is the first rare case in Malaysia, chemotherapy is not effective, and proton therapy is recommended to control the disease】

Sheng Quan has always been pain-free in the past. On June 12 this year, he was accidentally kicked in the right eye while playing. Unexpectedly, two weeks later, he complained of itching around the eye, redness, and swollen eyelids. He was referred to the hospital for a detailed examination.

A preliminary examination revealed a tumor on the inner side of the right eye. The hospital arranged for a tumor resection on June 24. Two days after the operation, a lump was found in the eye socket. Two weeks later, the eyeball was turned red, swollen, and protruding, and it was swollen huge like a ball.

The test report confirmed that he was suffering from a malignant peripheral nerve sheath tumor (MPNST). The doctor said that this is the first rare case in Malaysia, and the chemotherapy was not effective. At that time, the doctor predicted that the child would only have 6 months of life.

On July 26, Sheng Quan underwent surgery to remove the eyeball. Although 95% of the tumor had been removed, 5% of the cancer cells remained in the nerve line. Follow-up treatment was needed as soon as possible to avoid spreading.

Doctor said that if Sheng Quan receives radiotherapy, he will suffer from serious side effect such as damaging of his face and affecting his brain.

Proton therapy is a more effective and advance treatment as it can target the tumour accurately. The side effects will also be minimal. Only Taiwan is currently providing this treatment and the treatment fee sums up to RM350,000.

Sheng Quan's mother said that he is an obedient boy. He hopes to go to school and play with other children. Hence, Sheng Quan's family is hope that the generous society can lend a helping hand.

When Sheng Quan was born, there are freckles and moles on his limbs. When he was 6 months old, his frackles and moles turned darker and was confirmed to be Sarcomas.

His father, Gee Fook Choy, 55, is a federal reserved member. He suffers from Arteriovenous malformation which cause him to be at a higher risk of stroke. As a result, he is unable to carry heavy objects and unable to work under pressure. He retired last year and is currently working as a construction agent. He draws a monthly salary of RM2000. His father is willing to spend all his saving to save his son even though he is suffering from AVM.

Sheng Quan's mother, Hang Ying Kie, 28, is a nurse and is currently drawing a monthly salary of RM2782. She also works as a part time private nurse. As Sheng Quan is sick, she is currently on unpaid leave.

The couple has 3 children who are 7, 5 and 3 years old respectively. Sheng Quan's siblings will be taken care off by Fook Choy and his mother.

After home visit, One Hope Charity had decided to help accumulating the required medical fund of RM350,000. Sheng Quan's family agrees to allow One Hope Charity to take charge of the fundraising.