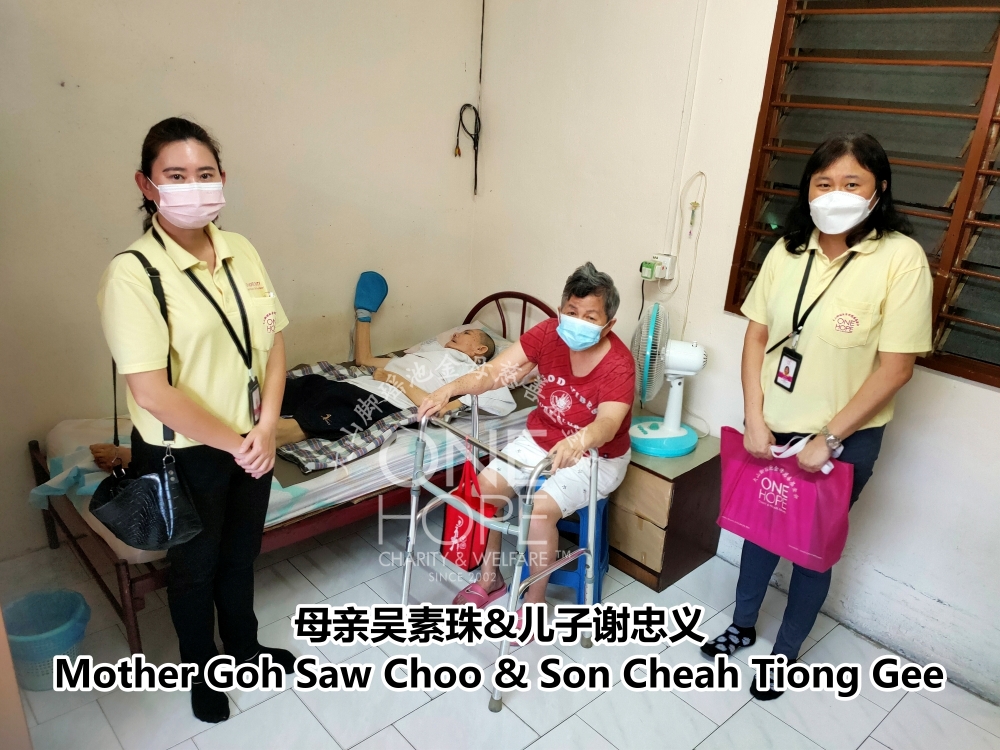 81-year-old mother, Goh Saw Choo and 64-year-old son, Cheah Tiong Gee, whom from Butterworth, Penang. Both of them suffered from disease and forced to settle in a nursing home because of there is no one to take care of them. ONE HOPE CHARITY help to raise RM60,000 for nursing home expenses in a total of two and a half years.

Cheah Tiong Gee was a fruit seller when he was young. Because of poor life, his wife had left him with his son. End up was left with Goh Saw Choo and Cheah Tiong Gee to rely on each other.

After Cheah Tiong Gee suffered first stroke 5 years ago and his mother took care of him. It was until he recovered and then return to the stall to sell fruits and their life was barely going to pass.

【Paralyzed in bed with a second stroke, the 81 years old mother could not take care of him and end up was sent to nursing home】

Two years ago, Cheah Tiong Gee was paralyzed on bed after a second stroke. The mother was old and not able to take care of him so force to send him to a nursing home.

Due to their financial constraints, other children of Goh Saw Choo could only afford part of the nursing home fees, so they sought assistance from ONE HOPE CHARITY. At that time, ONE HOPE CHARITY had helped them of RM500 per month for nursing home expenses. This support which lasted for 14 months and was not raised at that time.

After Cheah Tiong Gee admitted the nursing home, the mother was left alone. A year ago, she accidentally fell at home, and even underwent surgery in the hospital. She was implanted iron braced from the pelvis to the thighs resulting in her immobility. After discharged from hospital, due to there is no one to take care of her, Goh Saw Choo’s daughter Cheah Ai Leik (61 years old) sent her to the nursing home so that there’s someone to take care of her.

Goh Saw Choo & Cheah Tiong Gee expenses are borne by the daughter Cheah Ai Leik. She is a secretary, and the salary is not high. In addition of the nursing home fee, she also needs to bear the Cheah Tiong Gee's diapers expenses, so it is a burden for the daughter.

The mother revealed that her savings had been used up and there was no other way, so she sought the help of the ONE HOPE CHARITY. Hoping to get public assistance in order to allow her and the son to live in the nursing home.

Goh Saw Choo has 6 children, which 2 sons have passed away, the remaining eldest son Cheah Tiong Gee is paralyzed, 3 daughters are also near age of retirement. 2 of daughters are housewives and cannot afford to pay for the nursing home.

The second daughter, Cheah Ai Leik (61 years old), who is the only one can work with a salary of RM3,000. Half of her salary has been used to bear the cost of the nursing home. Her husband has also retired, and the son has borne the cost of milk powder and diapers of Cheah Tiong Gee. After a year and a half of expenses for two people, she has been unable to pay, so she hopes that ONE HOPE CHARITY can assist the required nursing home expenses.

After assessment of the application, ONE HOPE CHARITY decided to raise RM60,000 to pay cost of nursing home for 81-year-old Goh Saw Choo and 64-year-old Cheah Tiong Gee.