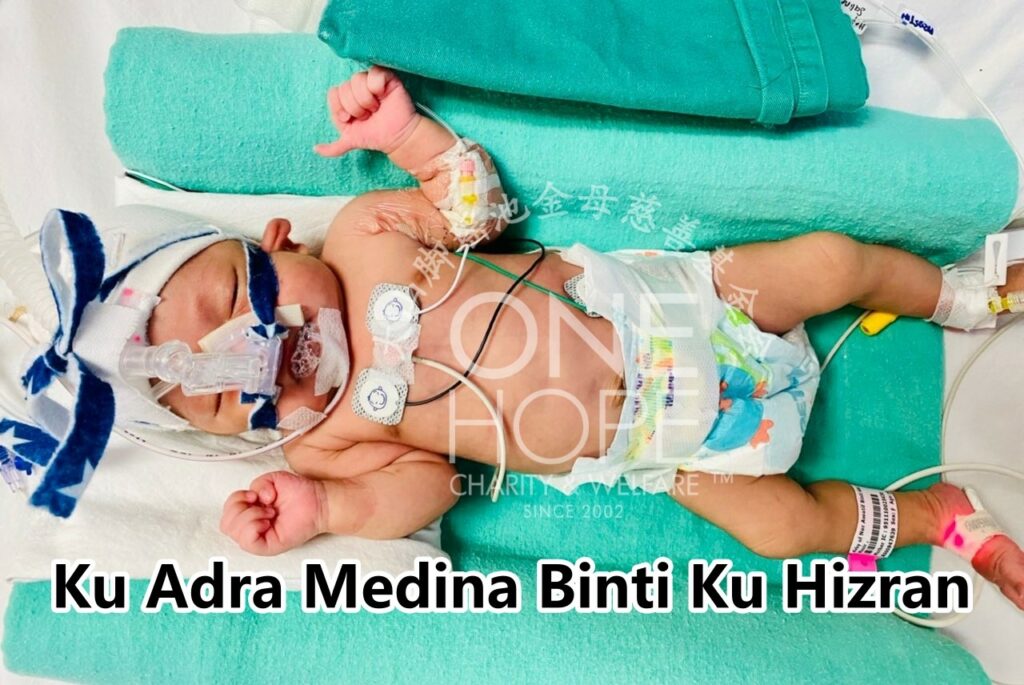 As soon as she was born, the now one-month-old baby girl was diagnosed with serious heart defect. She has been relying on breathing aid to survive and the doctor suggested that she needs to undergo a surgery as soon as possible, otherwise, her heart would gradually fail.

Her parents have never held their newborn. They can only watch the baby, who is in the incubator, from a distance. The baby girl is relying on a breathing aid to survive, and the mother cries almost every day looking at her daughter’s condition. The parents can only hope that the public can donate to help their daughter.

Baby girl Ku Adra Medina Bt Ku Hizran from Jitra, Kedah, was diagnosed with congenital heart disease at birth. She needs to undergo a surgery so that she can breathe on her own. However, the parents are unable to afford the huge surgical fee, hence they beg the public to help them with the RM70,000 in surgical and medical expenses.

【The mother was fund to have a prolapsed uterus and was bedridden for 18 days during her pregnancy. At the 36th week of pregnancy, she had a bleeding and the doctor immediately carried out an emergency caesarean section. The baby was rushed to the intensive care unit for oxygen supply due to shortness of breath right after she was born】

Baby Ku Adra Medina was born at Alor Setar Hospital on 27 June, weighing only 2kg. As she suffered from shortness of breath at birth, the doctor provided her with a breathing aid. After three days of observation at the intensive care unit, the doctor tried to remove the breathing aid so that she could breathe on her own, but she was still suffering from shortness of breath. Therefore, the doctor suspected that the baby girl had heart or lung problems and referred her to Penang Hospital for a thorough examination. The examination revealed that the baby girl had a hole in the heart with serious defects, namely ventricular septal defect (VSD), atrial septal defect (ASD), coarctation of the aorta (CoA) and patent ductus arteriosus (PDA), so she needs an emergency surgery in order for her to breathe on her own.

The baby girl is currently relying on a breathing aid to survive. The doctor informed that she needs to undergo two surgeries. The first is to expand her cardiovascular system, and the second surgery is a heart repair surgery that can only be carried out when she reaches 4kg or 5kg. As the current size of the girl is too small, the risk of undergoing both surgery at a time is too high. Therefore, the doctor needs to evaluate her condition after the first surgery before deciding on the second surgery.

Her 26-year-old father Ku Hizran Bin Ku Baharom works in a hypermarket, earning RM1,500 a month. Her 26-year-old mother Nur Awatif Bt Abd Nasir was a clerk before marriage and became a housewife after she got married. The couple can only afford their car loan and living expenses, and they do not have extra money to pay for the huge surgical fee. Hence, they approached One Hope Charity for help.

After reviewing the case, One Hope Charity agreed to assist in raising the RM70,000 in medical expenses. Her family agreed to fully authorise One Hope Charity to take charge of the fundraising and collect the donations from the public on their behalf.