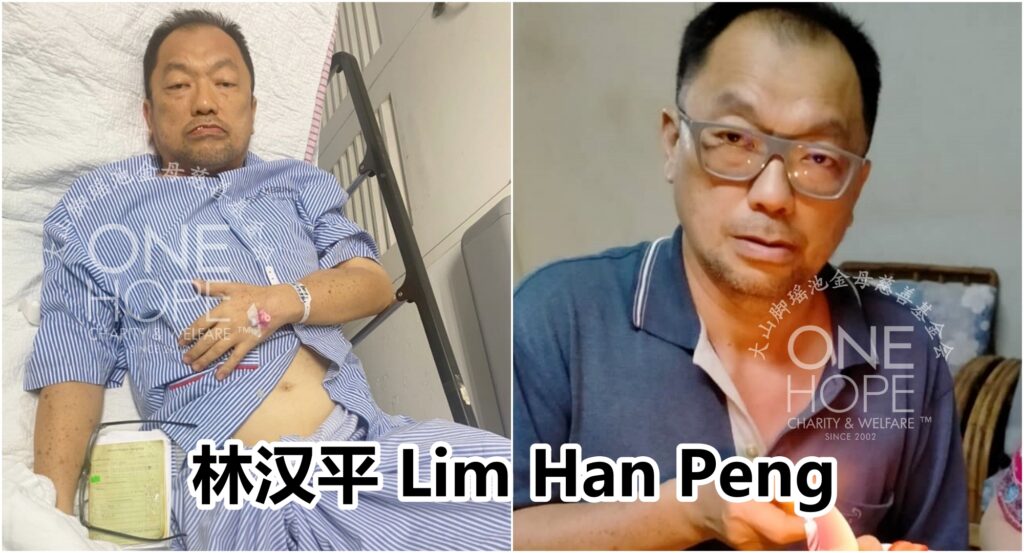 A 51-year-old man suddenly felt that he could not move his right hand in the middle of the night and quickly woke up his wife. The wife discovered that his mouth was lopsided. He was rushed to the hospital, and was diagnosed with a stroke. He needs to undergo a surgery within the golden window, to avoid from being paralysed or causing danger to his life.

51-year-old Lim Han Peng from Kepala Batas in Penang suffered from a stroke. His condition was critical and emergency. The doctor immediately referred him to a specialist hospital for surgery. However, his family could only afford RM20,000 and they begged for public donation for the shortfall of RM30,000 in medical expenses.

【Wife: My husband does not smoke and drink. He usually goes to bed in time and gets up early and he likes to drink soft drinks. Although he has the ‘three highs’ – high blood cholesterol, high blood pressure and high blood sugar, but he only takes medicine occasionally. He has had headaches and dizziness for a week】

Han Peng suddenly felt that he could not move his right hand and foot at around 2:00am on 28 July, so he woke up his wife. His wife noticed that the corner of his mouth was drooped to one side, and she rushed him to a nearby hospital for treatment. After several examinations, the doctor suspected a stroke and transferred him to another hospital for a thorough examination. The results showed that he had a stroke and needed to be transferred to a specialist hospital for mechanical thrombectomy.

His 45-year-old wife They Cheng Phek said that the husband started to complain about headaches and dizziness since a week ago, but he only stayed at home to recuperate. They never expected that it was an early sign of a stroke. It was also learnt that the patient lost 10kg in last month due to poor appetite, but he did not take it seriously.

Since it is necessary to undergo the surgery within the golden window to avoid serious damage to the brain cells, One Hope Charity approved the urgent help request in the shortest time possible so that the patient could be transferred to the specialist hospital for surgery. The surgery not only saved the patient’s life but also provided him with a chance of speedy recovery after undergoing various treatments and physiotherapy.

Han Peng is a staff of a finance company with a monthly salary of RM2,000. His wife Cheng Phek works as a warehouse supervisor in a food factory, earning RM2,100 a month. They have no children, but they need to bear the living expenses of their 75-year-old mother. During the emergency, they managed to borrow RM20,000 from their family and friends, so they approached One Hope Charity to help them with the shortfall of RM30,000 in surgical fee.

After receiving the application, One Hope Charity urgently reviewed the case and decided to assist Lim Han Peng in raising the remaining surgical fee. The family agreed to fully authorise One Hope Charity to take charge of the fundraising and collect the donations from the public on their behalf.