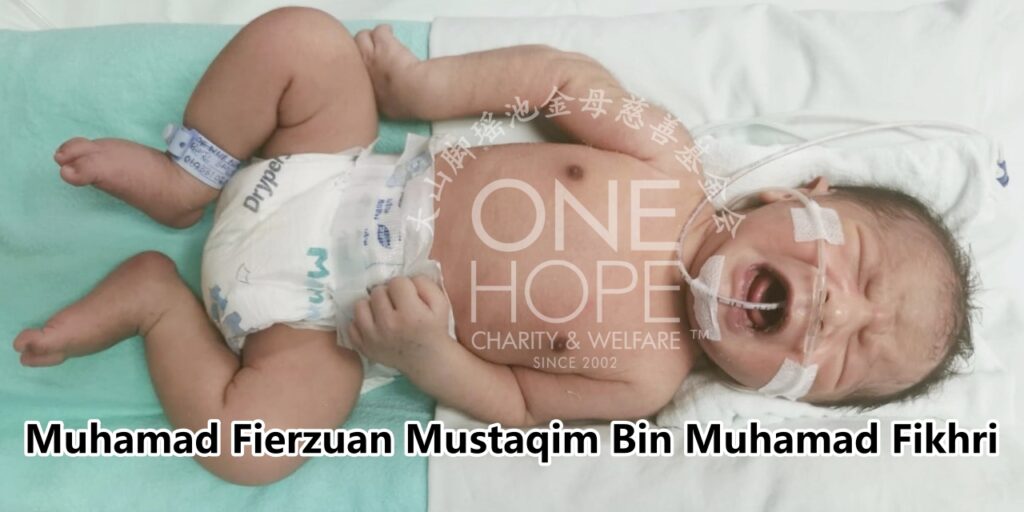 *RM10,000 from the “Emergency Medical Reserve Fund” has been channelled. Hence, One Hope Charity will only launch fundraising of RM70,000 for this case.*

A baby boy was born before full term and was diagnosed with severe congenital heart disease. He was sent to the intensive care unit before opening his eyes. Although the baby had been saved, his blood oxygen level kept dropping, so he needed emergency surgery to continue surviving.

Newborn Muhamad Fierzuan Mustaqim Bin Muhamad Fikhri from Pokok Sena, Kedah, was born on 8 December 2022. He has been staying in the hospital since then. His blood oxygen drops when he cries and needs oxygen aid. The doctor does not allow him to go home before the life-saving surgery. However, the parents are struggling with the surgical fee amounting to RM80,000.

【The baby with congenital heart disease receives treatment and is put under observation in the hospital. His mother blamed herself and cried every day. She also travels to the hospital every day to visit her son】

Muhamad Fierzuan Mustaqim was normal during the fetal period. Unexpectedly, he had shortness of breath, and his face turned purplish at birth. He needed a breathing aid and was referred to Penang Hospital for a thorough examination. He was later diagnosed with a congenital heart disease called Total Anomalous Pulmonary Venous Drainage (TAPVD).

The sudden news shocked the mother, and she blamed herself a lot. She also tried to search for the cause and suspected that the son’s heart defect was caused by food poisoning during her pregnancy. However, the doctor ruled out food as the cause, but the doctor could not tell the reason either. Therefore, the parents could only accept that it was God’s will. They actively seek medical treatment, hoping that their son can grow up.

The doctor informed the parents that the baby boy needed surgery within two weeks. Otherwise, he will not live until he is four months old. And now, the boy’s blood oxygen has been dropping drastically, so the treatment is a race against time.

The boy’s 26-year-old father, Muhamad Fikhri Bin Ayob, sells fruits in the night market, earning about RM2,000 a month. His 21-year-old mother, Nur Alianatasya Binti Samiaun, is a housewife. The couple has a one-year-old son. They can only afford RM5,000, and they are still short of RM80,000 in his surgical fee.

After reviewing the case, One Hope Charity decided to assist the baby boy in raising his surgical expenses. Family agrees to allow ONE HOPE CHARITY to take charge of the fundraising and at the same time, accumulating the donations from the public. For questions, call One Hope Charity's hotline at 016-419 2192 or 019-232 2192.