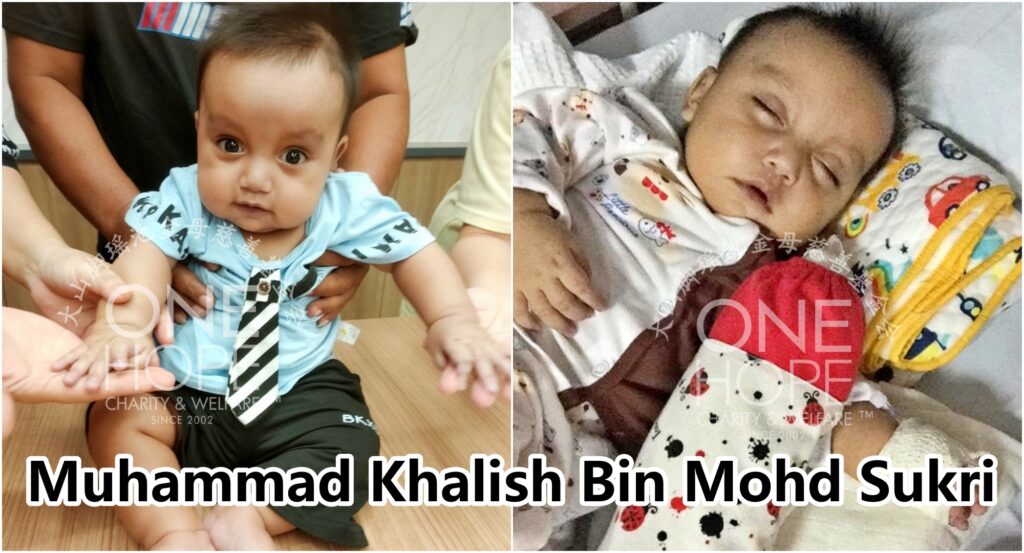 Seven-month-old Muhammad Khalish Bin Mohd Sukri is a chubby little boy with a cute face. However, his lips and nails are always cyanotic. The long-term hypoxia affected his heart which may lead to heart failure, so the doctor informed that an urgent surgery is needed to repair the heart defect, but the RM75,000 surgical fee worries the parents.

The baby boy’s heart is at risk of failure at any time, and the parents are living in fear. They plead the public to lend a hand and give the child a chance to survive.

Baby Muhammad Khalish from Sungai Petani, Kedah, was normal until he was born. When he was three months old, he went to seek medical treatment at a clinic due to a cold. The doctor noticed that the child was cyanotic, and he was urgently referred to Sungai Petani Hospital. He was later transferred to Penang Hospital for thorough examination.

Examination results showed that the baby boy had Tetralogy of Fallot – a combination of four congenital heart defects, namely the ventricular septal defect (VSD), pulmonary stenosis, a misplaced aorta and a thickened right ventricular wall, which usually result in a lack of oxygen-rich blood reaching the body.

Due to the critical condition, he needed to be referred to a specialist hospital for surgery. However, the parents are overwhelmed by the cost of the surgery, which is as high as RM75,000.

The baby boy’s 50-year-old father Muhd Sukri Bin Md Noor is a supervisor in a dormitory for foreign workers, earning RM1,800 a month. He also works as a welding worker part-time to earn RM200 extra. His 33-year-old mother Sotaya Tamsuan is a housewife. The couple have another nine-year-old daughter.