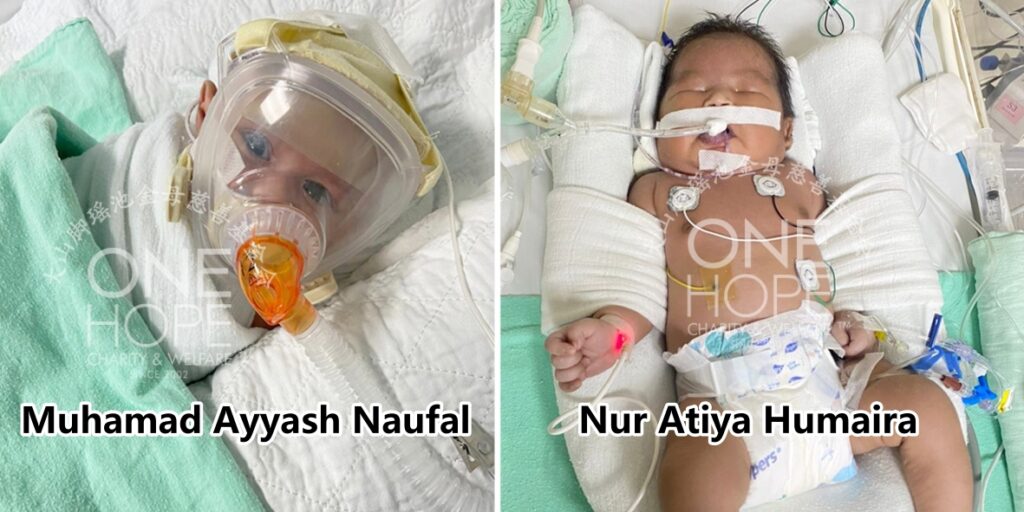 ***A total of RM10,000 from the “Emergency Medical Reserve Fund” has been channelled, hence, One Hope Charity will only launch a fundraising of RM160,000 for this case.***

They are unable to breathe on their own and relying on breathing aid in the intensive care units to survive. If they do not go for surgery, their hearts may fail at any time, and the two lives will be at stake. The two babies urgently need your help to save their lives.

Newborn baby girl Nur Atiya Humaira Binti Abdullah from Penang Island was born with cyanosis. During the treatment, her whole body became swollen. The baby girl is relying on medical equipment in the incubator to survive. She needs an emergency surgery to continue her life, but the family is worried about the RM80,000 in medical expenses.

Two-month-old baby boy Muhamad Ayyash Naufal Bin Muhamad Azhari from Bukit Mertajam, Penang was normal when he was born. He returned home and spent a month with his family. However, he suddenly suffered from shortness of breath and asthma when he was one month old. Examination confirmed that he suffered from congenital heart disease. He needs RM90,000 to undergo a life-saving surgery.

【Case 1: The baby girl was cyanotic after she was born. Her condition was not detected at first due to her dark skin, but she later suffered from shortness of breath and was diagnosed with heart disease】

When the mother pregnant with Nur Atiya Humaira, her prenatal check-ups showed that everything was normal. However, at 26 weeks of pregnancy, the fetus was found in breech position, and the fetus did not return to the natural birth position before delivery. So the doctor had to take out the baby girl by caesarean section. The baby was born at full term and weighed 3kg.

The baby girl was born with cyanosis and was confirmed to have transposition of the great arteries (TGA) and patent ductus arteriosus (PDA). She had undergone a balloon atrial septostomy (BAS) right after she was born, and she has been relying on a breathing aid to survive. She needs an arterial switch operation (ASO) as soon as possible, and at the same time to repair her atrial septal defect (ASD) and patent ductus arteriosus (PDA). Without the surgery, the baby girl will not survive for more than half a year.

Her 21-year-old father Muhammad Hakimi Bin Mat Isa is a motorcycle repair mechanic, earning RM1,000 a month. Her 19-year-old mother Nur Salwani Natasha Binti Mohd Zarihan was a hawker before she was pregnant, but stopped working after she got married and pregnant.

【Case 2: A two-month-old baby boy was born and spent a lovely month with his parents. Unexpectedly, he suffered from shortness of breath a month later, and was diagnosed with a heart defect】

Baby boy Muhamad Ayyash Naufal was normal during her mother’s pregnancy until he was born. His mother gave birth naturally at full term. Unexpectedly, one month after he was born, the parents noticed that the baby suffered from shortness of breath and wheezing, so they brought him to a paediatrician. The doctor referred him to the hospital and he has been hospitalised until today for about three weeks. He is now living on a breathing aid.

The baby boy found with a swollen heart. He was diagnosed with an anomalous left coronary artery from the pulmonary artery (ALCAPA), which is a rare congenital heart disease, together with atrial septal defect (ASD) and patent foramen ovale (PFO). The baby needs an urgent surgery before his heart fails, and the surgical fee is RM90,000.

His 27-year-old father Muhamad Azhari Bin Azmi works as an aircraft maintenance technician in the Air Force, attached to Kuantan Air Force Base. He earns RM2,800 a month. His 25-year-old mother Nur Alya Natasha Bt Mohd Yusoff is a BSN bank teller with a monthly salary of RM1,700.

After reviewing the cases following home visits, One Hope Charity decided to assist in raising the surgical fees for the two babies. Their families agreed to fully authorise One Hope Charity to take charge of the fundraising and collect the donations from the well-wishers on their behalf.