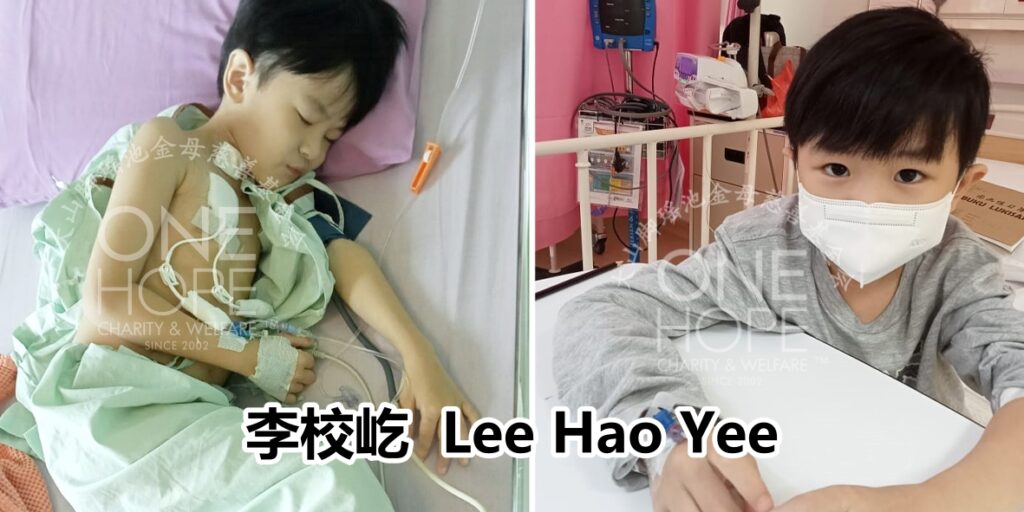 “I don’t want any more injections, it hurts…”

Eight-year-old boy Lee Hao Yee was diagnosed with Severe Combined Immunodeficiency Disease (SCID) three years ago. He has been in and out of the hospital to do blood tests since then. He also needs to receive IVIG and other injections every two weeks to improve his immunity. Because of this, Hao Yee has not been to kindergarten and primary school, and he spent almost all his childhood in the hospital.

After three years of suffering, the doctor suggested a bone marrow transplant. His family members underwent examinations and his father’s bone marrow was the most suitable for transplanting to him. His father is willing to donate bone marrow to save the son, but they are still lack of RM80,000 in medical expenses, so they hope that the public can help them.

【His blood sample was sent to the United States for tests, and he was diagnosed with Severe Combined Immunodeficiency Disease (SCID), which is a rare immunodeficiency disorder】

Eight-year-old Lee Hao Yee from Seremban was normal since he was born, but he suffered from repeated fever and cough when he was four months old and did not recover even he went for several treatments and hospitalisations.

When he was eight months old, he was found to have skin tuberculosis, with hard erythema like chickenpox on his armpits, back, hands and feet, and his whole body. His skin was confirmed infected, but at that time, a genetic test found nothing wrong, and his condition was not stable.

Until the age of five, Seremban Hospital referred him to the Department of Immunology at HUKM. His blood sample was sent to the United States for testing. The test confirmed that Hao Yee suffered from SCID, which is a rare immunodeficiency disorder.

The T-Cell count in his immune system was low, and the lack of autoimmune function leads to repeated infections. As the survival rate of this disease is only one to two years old, the doctor did not suspect that the child had the disease at that time. Fortunately, Hao Yee’s condition was relatively mild, but he was tend to getting infections.

Since then, Hao Yee needs to receive IVIG and antibiotics injections every two weeks to improve his immunity. The doctor also told the parents to minimise his contacts with the outside world and to live in a sterile environment to avoid infection. Hao Yee could not eat ice cream and take probiotic drinks, nor could his family members as they worried that the probiotics would stay in the toilet bowl, which would lead to infection of the child. Hao Yee also suffers from asthma, and he needs to use the inhalers every morning and night, and also withdraw phlegm from his nose.

In recent years, Hao Yee has been coughing non-stop, and even vomiting. After examination, it was found that the bacteria had entered the lungs and the lungs had many white dots. His liver inflammation and pneumonia have also been repeated. The patient needs a bone marrow transplant to resolve the immune system problem, and he was referred to the University Malaya Medical Centre. After the family members gone through bone marrow matching procedure in April, the doctor finally determined that the father’s bone marrow was more suitable for transplant, but the parents are worried as they are unable to afford the RM80,000 in medical expenses.

His 46-year-old father Lee Koon Teck is a lorry driver, earning about RM3,000 a month. His 40-year-old mother Chin Yen Mey was a clerk, but has quit her job to take care of the ill son since three years ago. The couple have another four-year-old son.

【It is not easy to take care of a sick child. The mother, who was almost collapsed once thought of suicide, but she changed her mind as she didn’t want her children to lose their mother at young age. The mother suffered from panic attack as she has been living under pressure, and she relies on medication to stabilise her emotions】

Every time when she sees the pain of her child getting injections and taking medicines, the mother has too much self-blame and helplessness. She blamed herself for not giving the child a healthy body, and she also felt helpless as she was unable to help the child bear the pain. In addition to comforting the child, the mother must not cry in front of him, so she can only hide and cry silently.

The mother once thought of suicide, but she changed her mind as she didn’t want her children to lose their mother at young age. She also felt that she has the responsibility to take care of her children. So she decided to actively seek medical treatment, and at the same time, not to give up on her son’s treatment.

Yen Mey said that she found that her arms were paralysed, accompanied by breathing difficulty earlier, and she often had the hallucination of her child coughing and crying. She was referred to a psychiatrist and confirmed that she had panic attack as she was too worried about her child’s condition. The situation, coupled with the exhaustion of taking care of the child, put her under various pressures. She is now taking medications, and her condition has improved greatly after taking the medications.

One Hope Charity reviewed the case following a home visit and decided to raise the required RM80,000 for bone marrow transplantation. His family agreed to fully authorise One Hope Charity to take charge of the fundraising and collect the donations from the well-wishers on their behalf.