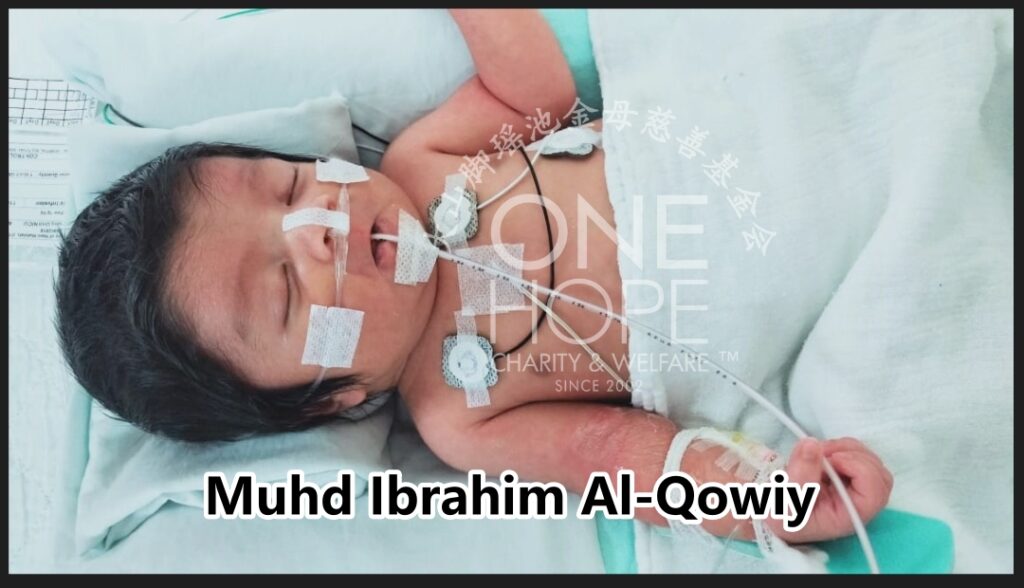 ***A total of RM10,000 from the “emergency medical reserve fund” has been channelled, hence, One Hope Charity will only launch a fundraising of RM100,000 for this case.***

The baby was born for only three days. Before he could open his eyes to see his parents, he was found to have a heart murmur. He was later diagnosed with complicated congenital heart disease and had been surviving on breathing aids in the intensive care unit. He urgently needs life-saving surgery.

The life of Muhd Ibrahim Al-Qowiy Bin Muhd Jannatul Firdaus from Alor Setar, Kedah, is at stake, but he is from a low-income family. His parents are worried as they can’t afford the substantial surgical fee. They had nowhere to seek help, so they approached One Hope Charity for assistance.

【The parents were excited as they were supposed to welcome a healthy baby boy. Before the baby was allowed to be discharged, he was rushed to the intensive care unit. And now, he can’t return home, and his parents are worried seeing his life is at stake.】

Since the day the mother was pregnant with the baby boy, he seemed to be healthy. The prenatal examinations showed that he was normal, and the baby boy was born in Alor Setar Hospital on 25 October, weighing 3.6kg. Unexpectedly, on the third day after birth, the doctor discovered that the baby boy had a murmur in his heartbeat, so the doctor referred the baby for a detailed examination. The baby boy was diagnosed with coarctation of the aorta (CoA) and isthmus hypoplasia, patent ductus arteriosus (PDA), atrial septal defect (ASD) and partial anomalous pulmonary venous drainage (PAPVD).

And now, the baby boy is in critical condition and surviving on breathing aids in the hospital. He needs to be referred to a specialist hospital for surgery. According to the specialist doctor, the baby boy urgently needs his first surgery to correct the malformed blood vessels so that oxygen can be sent to his heart. Suppose the baby cannot breathe on his own after the surgery. In that case, the doctor will need to perform a second surgery to repair his cardiovascular stenosis and treat his other heart problems, such as atrial septal defect (ASD) and partial anomalous pulmonary venous drainage (PAPVD).

His 27-year-old father Muhammad Jannatul Firdaus Bin Noor Azlan is a part-time student pursuing his bachelor’s degree. He works part-time as a graphic designer and photographer, earning about RM1,500 a month. His 31-year-old wife Hani Nabilah Bt Sukarno is a housewife. The couple has four children, aged six, four, three and the newborn boy.

After reviewing the case, One Hope Charity decided to assist in raising the medical expenses the baby boy needs. His family agreed to fully authorise One Hope Charity to take charge of the fundraising and collect donations from the well-wishers on their behalf.