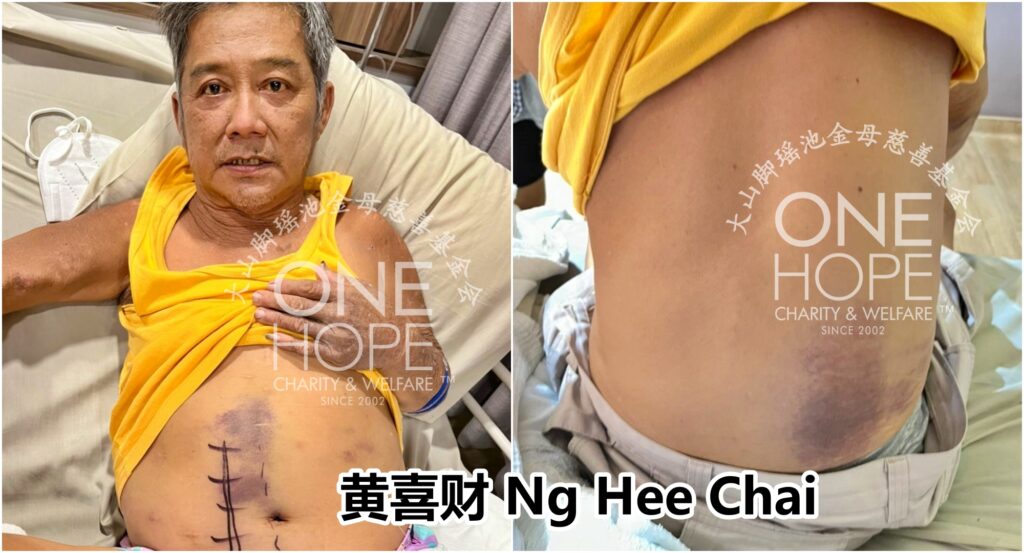 A 57-year-old motorcycle repairman suffered from kidney disease and heart disease successively. He suffered from massive hematoma in the psoas muscle due to long-term dialysis and medication, and the pain was so severe that he had the idea of ending his life. His children have exhausted their savings in his dialysis and heart surgery earlier, and now, he needs RM30,000 to undergo a surgery to clear the blood clots. His children hope that the public can help them so that their father can free from the pain.

Ng Hee Chai from Bukit Mertajam, Penang has been undergoing kidney dialysis since 25 years ago. He also suffered from heart vascular blockage and went through a life-saving surgery. Recently, he experienced severe back and low back pain, and a check at the specialist hospital revealed that he suffered from massive hematoma in the psoas muscle and needed a surgery to clear the blood clots.

Over the years, the cost of dialysis and heart surgery have exhausted his children’s savings. They also borrowed from the relatives and friends to pay for his medical expenses so the children are unable to afford his surgical fee this time, but they still hope that their father can receive treatments to get rid of the pain.

【Hee Chai is a positive, optimistic and cheerful father. Although he has to endure 25 years of dialysis, heart blockage and other medical problems, but he faces the treatments positively】

Hee Chai has been undergoing dialysis since 1997. Although the dialysis fee is covered by the Social Security Organisation (SOCSO), but he needs to pay for the erythropoietin injections, which cost RM720 a month. In 2020, two of his heart vascular were blocked – one by 100% and another one was 50% blocked, and he needed a heart bypass surgery. The surgical fee then that cost over RM70,000 had exhausted his children’s savings, and they even borrowed from the others to pay for the surgical fee. His heart condition was temporarily relieved after the surgery.

On 31 May this year, he went to the hospital after a sudden pain in his left lower back. The doctor could not find the cause and allowed him to be discharged, but he still felt abnormal pain. His children then decided to send him to a specialist hospital for examination, and the doctor diagnosed him with massive hematoma in the psoas muscle due to long-term medication effect. He needs RM30,000 to undergo a surgery to remove the blood clots.

And now, his left lower back has swollen and there are bruises on his body. He is depressed and even wanted to commit suicide as the pain was too bad. His family members tried to cheer him up and comfort him, and at the same time, they hope that he can undergo the surgery as soon as possible to be freed from the pain.

Hee Chai was a motorcycle repairman, but since he suffered from kidney disease, he has been relying on the monthly aid of RM500 from the Social Security Organisation (SOCSO). His 54-year-old wife Long Yoke Ying is a housewife, and she works part time as a tailor to earn extra money for the family.

They have three children. Their 33-year-old eldest worked in Australia since many years ago, but he has lost contact with the family. Their 31-year-old second daughter Ng Huey Ling is an accountant earning RM7,000 a month. Their 28-year-old youngest daughter Ng Huey Ting works as a kitchen assistant in Australia. Huey Ting and husband have two children, aged eight and nine, and were taken care by Huey Ting’s mother. And now her father is ill, she decided to return to Malaysia to take care of her father.

The daughters have exhausted their savings as they need to bear the living and medical expenses of their parents, so they are unable to afford the RM30,000 in surgical fee. After reviewing the case, One Hope Charity decided to help him to raise RM30,000. His family agreed to fully authorise One Hope Charity to take charge of the fundraising and collect the donations from the well-wishers on their behalf.