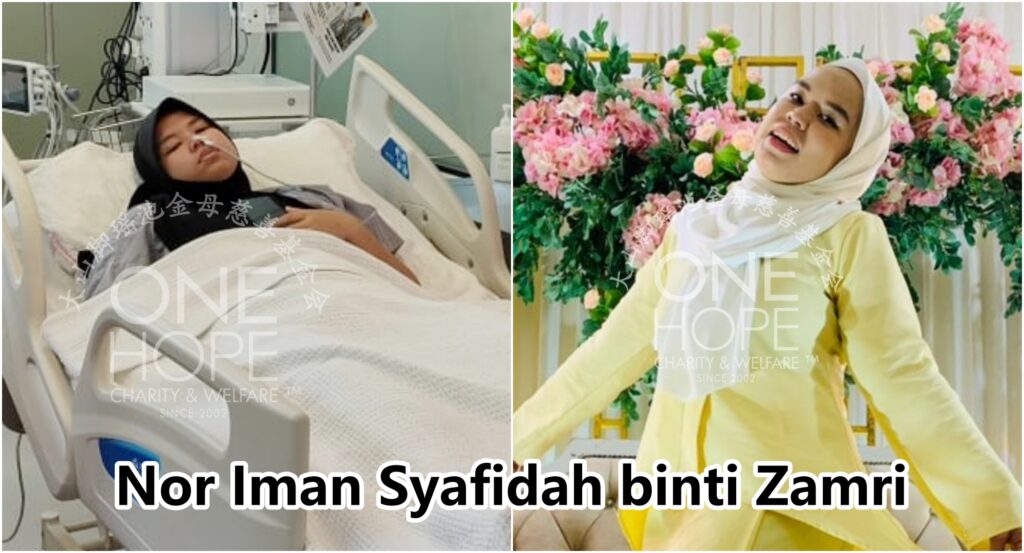 A couple was excited to welcome the arrival of their second child. Unexpectedly, the 26-year-old pregnant mother, who was two months pregnant, suffered from cerebral vascular blockage. She needed urgent surgery to save the lives of the fetus and herself. The husband eagerly hoped the public would donate RM50,000 to keep his wife and the unborn baby alive.

Nor Iman Syafidah Binti Zamri from Selangor was healthy. Everything seemed normal during her prenatal check-ups. Unexpectedly, she fainted for 15 minutes when she was two-month pregnant, but her husband did not take it seriously.

Recently, the husband discovered that she was slurring her speech and could not move the left side of her body. She immediately sent his wife to see a doctor. Examination revealed that she had a cerebral vascular blockage and needed an urgent mechanical thrombectomy. The news shocked the family, and they were worried about the safety of the mother and baby.

The doctor informed them that if she did not undergo surgery, the fetus may not be safe, and the wife may be paralysed for life or even worse. However, the husband could not afford RM50,000 in surgical expenses.

Nor Iman Syafidah fainted when she was pregnant with her first child but was fine when she was rushed to the hospital. And now she fainted again during her second pregnancy but regained consciousness after 15 minutes, so her family did not take it seriously.

A few days ago, her husband woke up in the morning to make milk for their child, and the woman also got up to clean up the child. After that, they continued to rest until around 10 am. After waking up, the husband discovered that his wife was slurring her speech, and the left side of her limbs was weak.

As the woman did not have any medical history, the husband did not take it seriously. He thought it was just a short-term cramp, so he helped his wife clean up herself. They also took breakfast and went to Putrajaya Hospital to seek medical treatment at around 1 pm.

The doctor suspected the young woman’s cerebral vessels were obstructed and referred her to a nearby stroke hospital. Upon arriving at the hospital, the doctor confirmed that she needed a mechanical thrombectomy due to cerebral vascular obstruction. However, the surgical cost was expected to be at least RM50,000. The family was at a loss as they could not afford the surgical expenses.

Her 29-year-old husband, Mohammad Shawal Bin Azhar, is an express bus driver with a salary of about RM2,500. The woman was a kindergarten teacher before she got married and a housewife after marriage. With a meagre salary, the husband needs to support her wife, child and parents. He cannot afford the surgical expenses, so he asks for help.

After an urgent review of the case, One Hope Charity decided to assist Nor Iman in raising the medical expenses she needed. The family agreed to fully authorise One Hope Charity to take charge of the fundraising and collect donations from the well-wishers on their behalf. Contact One Hope Charity’s hotline at 016-419 2192, 019-232 2192 and 04-539 9212.