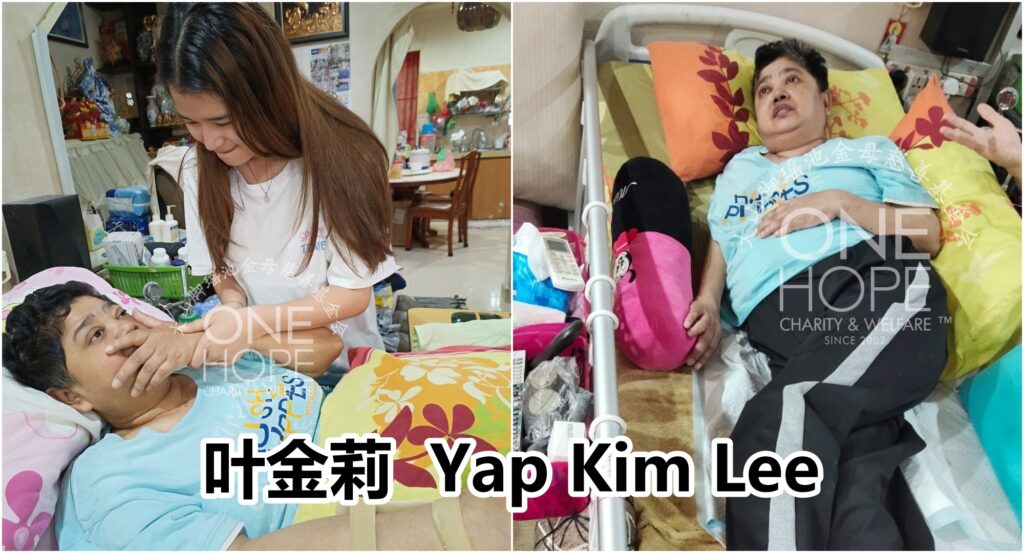 Yap Kim Lee, a 55-year-old Chinese woman, once fell and was left feeling faint and feverish. Her examination by the doctor revealed that she had a brain tumour. Unexpectedly, her body was getting weaker and her legs became weak and paralyzed. The doctor suspected that she had a small stroke. After 2 years of blood tests and bone marrow tests, she was confirmed to be suffering from Tumefactive Multiple Sclerosis and cerebral palsy.

For three years, the husband has been caring for his ill wife. He unexpectedly developed kidney failure in October of last year and required dialysis. He had no income and was unable to work. The doctor advised that his wife take medication every six months to stop her condition from getting worse day by day, but one dose of medication is expensive, and neither of them can do anything.

【The only daughter who is studying in a college still has 4 subjects to complete after 4 years of courses, but her family situation forced her to suspend school and work】

Yap Kim Lee, who lives in Sungai Dua, Butterworth, was admitted to the hospital in August 2019 after a sudden fall. The patient was found to have a brain tumour during the examination. She was rendered powerless after electrotherapy and was referred to Penang General Hospital. Due to the woman's complicated situation, she was immediately referred to the Kuala Lumpur General Hospital for a thorough examination.

The husband, who works as a Lorry driver, adores his wife and takes her to the Kuala Lumpur hospital on a regular basis for follow-up visits and treatment. During this time, his wife began to have difficulty walking. She couldn't breathe because her lower body and right side were paralysed.

The doctor preliminarily concluded that the woman was caused by a small stroke, but after a detailed examination, it was confirmed that she was suffering from Tumefactive Multiple Sclerosis. She needed to inject a dose of medicine every six months. The hospital welfare department had borne the cost of the first dose of medicine, but subsequent medical expenses need to be borne by the patients themselves.

Lee Chun Seng (56), Yap Kim Lee's husband, is a lorry driver. He can afford his only child's education and his wife's medical consultation with a meagre monthly income of RM2,200. Lee Chun Seng, on the other hand, was diagnosed with kidney failure and required dialysis in October of last year.

He requested that his wife receive follow-up care at Seberang Jaya Hospital from the Kuala Lumpur Hospital. He also needs to pay for kidney dialysis at the same time. He is requesting kidney dialysis and assistance from SOCSO because he is currently unable to work. Yap Kim Lee worked as a bihun salesperson before becoming ill, and she now receives RM1,500 per month in SOCSO to cover her expenses.

The 22-year-old only daughter, Lee Zhe Lin, is studying business accounting at the TARC. She still needs to take 4 subjects to obtain the ACCA diploma. As her parents fell ill, she chose to work. She is currently working in the accounting firm with a salary of RM2,200.

After reviewing the case, One Hope Charity decided to assist in raising for the woman's medical expenses. Her family agreed to fully authorise One Hope Charity to take charge of the fundraising and collect donations from the well-wishers on their behalf.