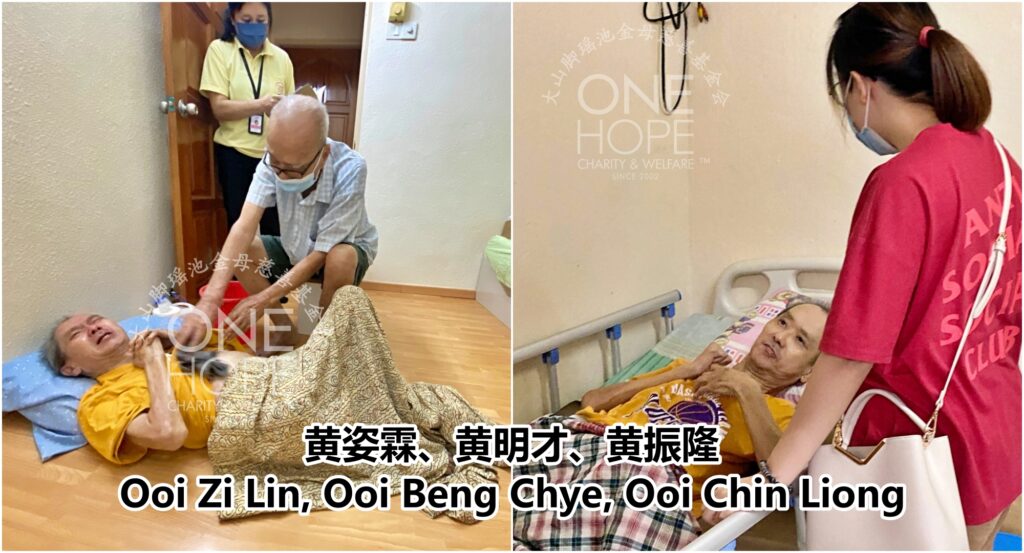 21-year-old Ooi Zi Lin grew up in a single-parent family after her mother left her when she was young. She has been living with her father and grandfather. She started to work part-time to support herself since secondary school. She also studied hard and entered a university. She is currently a bachelor’s degree student in international business.

Nine years ago, his 54-year-old father Ooi Beng Chye, who used to be a hawker, suffered a stroke and was unable to work since then. Her elderly grandfather took up the responsible to take care of her father. Since then, Zi Lin worked part-time after school to earn money to support the family, and she also tried her best to help her grandfather in taking care of her father.

In October last year, her father’s condition deteriorated. He was paralysed and his right limbs were sclerotic and atrophied. He was unable to speak and move any more. Her 83-year-old grandfather Ooi Chin Liong has been taking care of her father over the years but as her grandfather started aging, the responsibility of taking care of her father has becoming more stressful and exhausted.

As the only daughter, Zi Lin was exhausted both physically and mentally. In addition, the heavy loads in her studies made her unable to continue with her part-time job. Her family is financially struggling, and she is helpless. It happened that she came across with One Hope Charity’s food aid programme, so she decided to seek for help.

【Zi Lin still needs two years to complete her tertiary education. One Hope Charity decided to raise RM100,000 to support her monthly living expenses for two years, as well as his father’s nursing home expenses for five years and other expenses】

The mother of Ooi Zi Lin from Ayer Itam, Penang, left when she was young. Zi Lin started to work and support herself since she was 13, right after she started secondary education. She worked part-time as sales assistant at fairs, shop assistant, waitress, clinic assistant, childcare centre assistant, cashier, clerk, account assistant among others. She also worked to distribute flyers and took up other part-time jobs. She entered a university through perseverance and hard works, and she is currently a student in International Business.

She applied for PTPTN study loan to pay for her studies, and at the same time, she worked part-time to earn a meagre income to support her family. She also received a monthly aid from the Welfare Department to cover the living expenses of the family. Fortunately, one of her aunts also shared part of the financial burden, so the financial condition of the family was still barely manageable.

【Zi Lin felt a little pain in her back bone when she was 10 years old. She went to the hospital for examination and found out that she had scoliosis of 30 degrees. However, the scoliosis decreased to less than 20 degrees after she actively involved in swimming, and it is now no longer a serious problem for her 】

Zi Lin originally worked as a part-time clinic assistant in her spare time, working two to three hours a day. She earned between RM300 and RM500 a month. However, the schedule for her classes for the semesters starting from this year conflicted with her part-time job, and at the same time, she will be busy in her studies, so she had to stop her part-time job, which affected the financial condition of the family.

Earlier, One Hope Charity launched its food aid programme for university and college students, where poor and underprivileged students from tertiary education institutions could apply for food supply aid and the aid will be sent out to them through courier services. Zi Lin was one of the beneficiaries at that them. As her 83-year-old grandfather was gradually struggling to take care of her father, and she needed to attend classes and part-time jobs, so she also applied for nursing care for the father to ease the burden of her grandfather.

After reviewing the case following a home visit, One Hope Charity decided to help the family. With the consent of Zi Lin and her grandfather, Beng Chye was moved to a nursing home. At the same time, One Hope Charity will sponsor the monthly living expenses of Zi Lin for two years until she graduates from the university, so that she can now concentrate on her studies.

Her family agreed to fully authorise One Hope Charity to take charge of the fundraising and collect the donations from the well-wishers on their behalf.