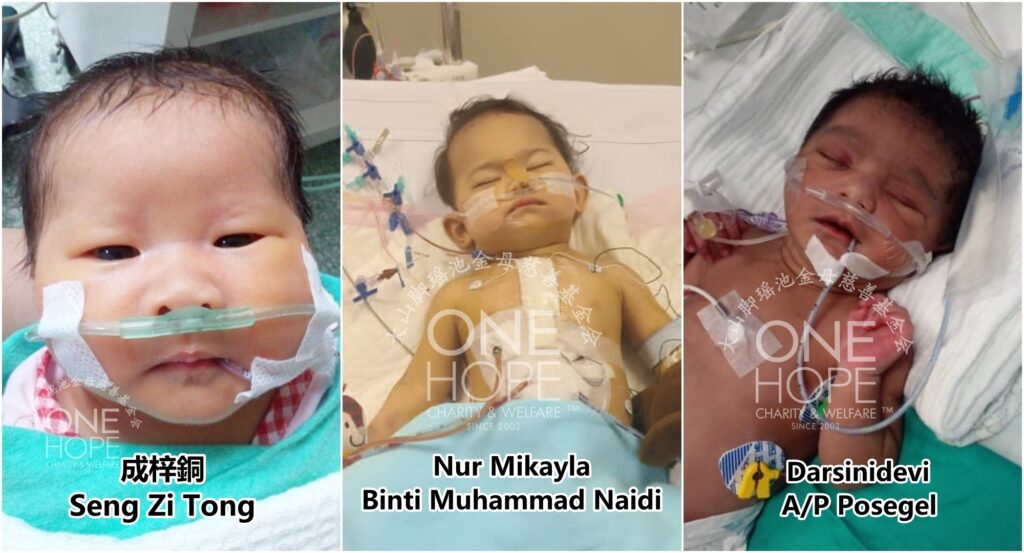 *This case will channel RM20,000 from the "Emergency Medical Reserve Fund". Hence, One Hope Charity will only launch fundraising of RM205,000 for this case.*

They are the apples of the eye of their parents, but the three girls were born with congenital heart disease. They face more life challenges than others, and heart repair surgery is the only option for them to survive. However, their parents are worried as they cannot afford the substantial surgical expenses.

Three-year-old girl Seng Zi Tong from Ipoh, Perak, one-year-old girl Nur Mikayla Binti Muhammad Naidi from Alor Setar, Kedah and one-year-old girl Darsinidevi A/P Posegel from Bedong, Kedah, are girls with congenital heart disease. Coincidently, the doctors told the parents that the girls were suitable for surgery during their respective follow-up visits; otherwise, their lives may be at stake.

Their parents only hope their girl can live a carefree life like the other children and grow up safely and healthily. However, this is a luxury wish that needs support from the public.

【Case 1: Three-year-old girl looks no different from other children, but she has a congenital heart defect and needs surgery before she starts schooling】

The parents were worried but still hoping for the best, expecting the holes in the heart would close on their own. These hole defects in the heart usually will heal and shut within two years after the baby is born. Otherwise, the baby will need treatment to avoid affecting their growth.

Besides having heart problems, little Zi Tong also had a cleft palate. Fortunately, she had surgery to treat the cleft palate.

Two holes in Zi Tong's heart closed on their own six months after birth. However, during a follow-up visit when he was two, the last hole in her heart was still open, and the possibility of self-healing was slim.

Her mother, Wong Eol Ling, said that a further screening revealed that the hole in Zi Tong's heart was too close to the valve, and the hole-blocking procedure may cause bleeding and increase the risk of surgery. Based on this consideration, the doctor opted an open heart surgery to repair the defect to prevent the hole from expanding as her heart grows, which may affect her future development. She needs surgery before she enters school.

Zi Tong cannot involve in vigorous movements. Her parents will have to stop Zi Tong and her sister when they get too excited as they play together, worrying that Zi Tong's heart cannot bear the excitement.

Zi Tong's 43-year-old father Seng Kam Woh, is an odd job worker with a daily wage of RM60, while her mother, Wong Eol Ling, is a housewife. The couple also has a six-year-old daughter.

【Case 2: A one-year-old girl has undergone two heart surgeries. The oxygen content in her body dropped after she tested positive for Covid-19, and she urgently needs a third surgery】

One-year-old girl Nur Mikayla Binti Muhammad Naidi tested positive for Covid-19 in early December. Although her quarantine period was over, she still needed a breathing aid for about a month as the oxygen level in her body dropped drastically.

A few days ago, Alor Setar Hospital referred the girl to Penang Hospital. An examination revealed that the heart stents implanted in her when she was three weeks old and nine months old had blocked the blood vessels, failing the oxygen delivery. She needs to be transferred to a specialist hospital for urgent surgery. Otherwise, her life will be at stake.

Nur Mikayla was born on 19 December 2021. Her limbs and lips were cyanotic. Due to high jaundice index, the girl was admitted to the hospital three days after birth. She was later diagnosed with Tetralogy of Fallot (TOF). She underwent two surgeries – the first one when she was three weeks old and the second when she was nine months old, to implant heart stents.

In early December 2022, the girl was down with a fever and tested positive for Covid-19. She also had a bacterial infection, so she was admitted to the hospital. During a nearly one-month stay in the hospital, her oxygen level dropped drastically, so the doctor transferred her to the Penang Hospital. An examination revealed that the heart stents had blocked her blood vessels, resulting in poor oxygen delivery. Her condition was critical, and she needed to be immediately transferred to a specialist hospital for heart stent removal surgery. Otherwise, she may not survive.

Her 22-year-old father, Muhammad Naidi Bin Muhammad Anuar, is a factory operator with a monthly salary of RM1,500. Her 22-year-old mother, Nur Zulaika Binti Mohd Rashid, was a cashier and became a full-time housewife after marriage. The girl is their only daughter.

【Case 3: A pregnant mother suffered from gestational diabetes and had an urgent caesarean section after the fetus' heartbeat increased. The baby was diagnosed with severe congenital heart disease at birth】

One-year-old girl Darsinidevi A/P Posegel is lively and cute, but many may not know she has a congenital heart disease that may endanger her life. Although she has no symptoms at the moment, examination showed that she had multiple heart defects. She had holes in her heart, malformation of the right ventricular and transposition of the great arteries.

The mother of Darsinidevi from Bedong, Kedah, had gestational diabetes during pregnancy. When she was nine-month pregnant, she went for a regular pre-natal check-up. The doctor discovered that the fetus' heartbeats were too rapid and decided to perform a caesarean section. The baby girl was sent to the intensive care unit and relied on a breathing aid due to breathing difficulty. An examination showed that she had severe congenital heart disease, namely the tricuspid atresia, transposition of the great arteries (TGA), ventricular septal defect (VSD), atrial septal defect (ASD) and right ventricular hypoplasia.

During a follow-up visit recently, the doctor told the parents the child needed surgery. Otherwise, she may not grow up. The news terrified the parents.

Her 29-year-old father, Posegel A/L Krishnan, can only work as an odd job worker at a scrap metal recycling centre as his daughter is often in and out of the hospital. He earns about RM1,000 a month. Her 32-year-old mother, Girthana A/P Raja Kumaran, was a factory operator and quit her job to become a housewife after marriage.

After reviewing the cases following home visits, One Hope Charity decided to assist the three girls in raising their needed medical expenses. The three families agreed to fully authorise One Hope Charity to take charge of the fundraising and collect donations from the well-wishers on their behalf.

After reviewing the case, One Hope Charity decided to assist them in raising their surgical expenses. Families agreed to fully authorise One Hope Charity to take charge of the fundraising and collect donations from the well-wishers on their behalf. For questions, call One Hope Charity’s hotline at 016-419 2192, 019-232 2192, or 04-539 9212.