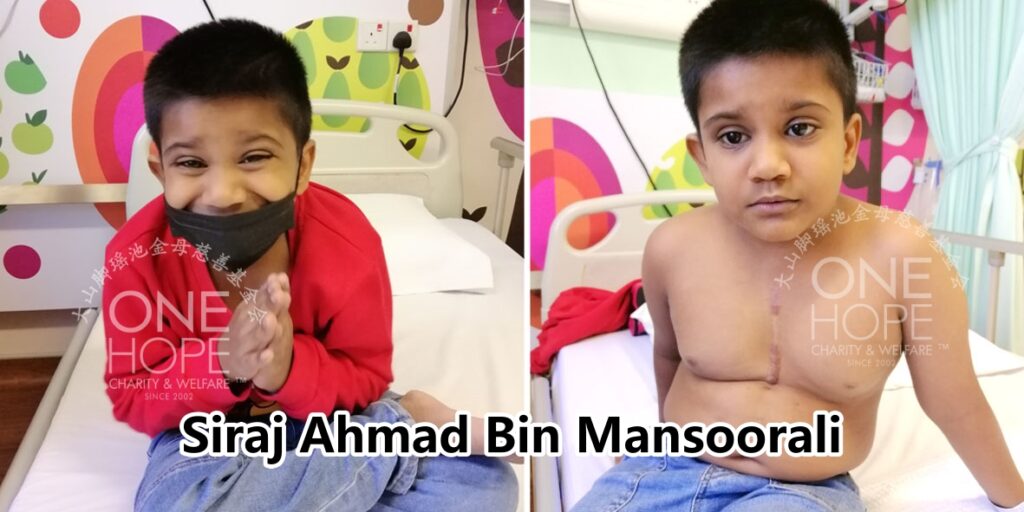 *This case will channel RM15,000 from the "Emergency Medical Reserve Fund". Hence, One Hope Charity will only launch fundraising of RM70,000 for this case.*

Siraj Ahmad bin Mansoorali, a 6-year-old boy from Butterworth, is lively and active, with a seemingly robust appearance, but he is a veritable "blue baby". Since he was a child, he had suffered from congenital heart disease. He's had two operations, and he's now having the third one at the right time.

He was a premature baby who spent a year in the intensive care unit after birth. He had congenital heart disease since he was a child, and he had heart repair surgery at the ages of 3 months and 4 years. His cyanosis became more and more serious when he was re-examined 2 years later, and a third operation was urgently needed to save his life.

【The mother is on dialysis and is partially blind. She continues to work as a hawker and earns a pittance. The money she saves will be used for the child's follow-up appointments】

7-month-old Siraj Ahmad was born prematurely. He was born in May 2016 at the Penang Seberang Jaya Hospital. The doctor made the decision to perform an emergency caesarean section at that time because the mother's blood pressure was so high. The newborn was hurriedly placed in the incubator for a year.

During this time, due to cyanosis and shortness of breath, the child was diagnosed with congenital heart disease, as well as cardiovascular stenosis, valve leakage, and other issues. PA Banding was performed on August 17, 2016 to postpone the condition. The child then underwent heart repair surgery for the second time on January 10, 2020, namely Gleen Shunt shunt and atrial septal resection (AS-LV-MPA).

The resilient child has faced challenges and is now gradually maturing. He is vivacious and energetic and frequently runs around, but typically he is out of breath, his fingers turn blue, and he has bags under his eyes. He needs oxygen support once he becomes too out of breath.

Father Mansoorali A/L Jamalludin (45 years old) is a resource recovery worker. Mother Sharifah Binti Md Hussain (43 years old) was involved in a car accident 20 years ago; as a result, her right eye no longer functions, and she is partially blind. She has a disability card and is paid RM450 in welfare benefits each month. She was given a kidney failure diagnosis four years ago and required three days of weekly dialysis. She continued to earn RM20 per day as a hawker nonetheless in order to save money for her child's follow-up appointment.

Despite their meagre salary, the parents live frugally and save their money so that their children can see a doctor. They are now hoping that the public will assist their children with the cost of surgery.

After reviewing the case, One Hope Charity decided to assist him in raising his surgical expenses. Family agreed to fully authorise One Hope Charity to take charge of the fundraising and collect donations from the well-wishers on their behalf. For questions, call One Hope Charity’s hotline at 016-419 2192, 019-232 2192, or 04-539 9212.