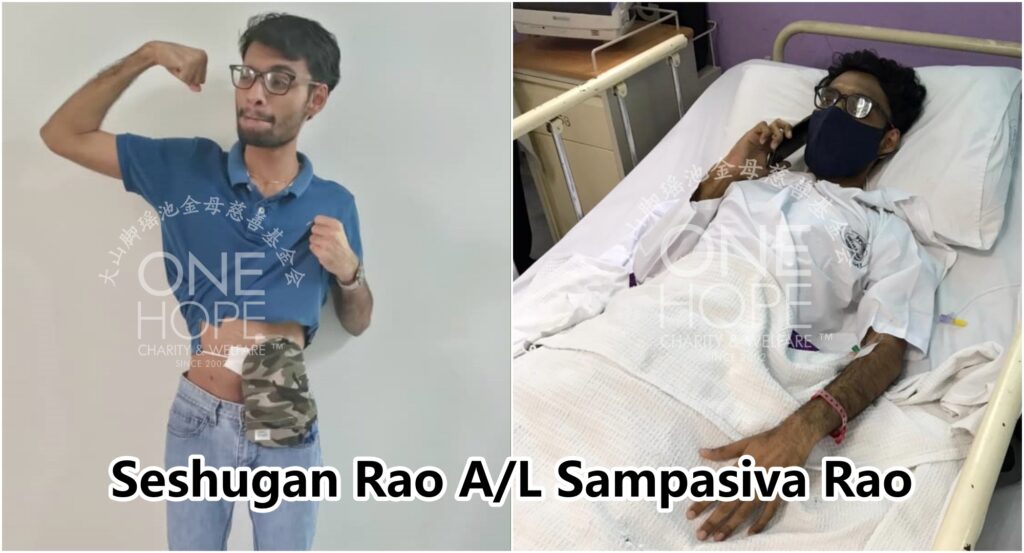 Seshugan Rao A/L Sampasiva Rao from Rawang, had constant diarrhoea, abdominal pain, bloody stool, fatigue and loss of appetite when he was 15. He needed to go to the toilet seven to eight times a day. When he sought medical treatment, the doctor suspected he had food poisoning. His weight plummeted from 55kg to 30kg within four months.

The doctors failed to come out with a diagnosis, so he did not receive proper treatment at that time. When he was 19, he was referred to another hospital for examination and was diagnosed with Crohn’s Disease – an autoimmune disease that causes chronic and recurrent inflammation of the gastrointestinal tract. He needs medication to repair the large intestine, so he pleads for RM22,415 medical expenses.

【Being plagued by a “strange disease” did not deter the young man from earning a university degree. He spent six years completing his degree in programming at Universiti Malaya and started to support his family financially. And now, his condition has deteriorated, and he has colon ulceration and intestinal perforation. He hopes to have a successful treatment so that he can resume a normal life】

In the four years since he started to experience the symptoms, Seshugan Rao was misdiagnosed with food poisoning, tuberculosis, and stomach ulcers. His condition was not stable. At last, he was diagnosed with Crohn’s Disease. He tried various medications and also suffered from the side effects of treatments, such as fatigue, dizziness and joint pains.

His illness did not hinder his determination to succeed in life. He entered Sixth Form after his secondary education and was later enrolled at Universiti Malaysia to pursue a degree in electrical engineering.

During the treatments and his unstable conditions, Seshugan Rao was frequently admitted to the hospital, resulting in him spending longer than his peers to complete his studies. During his six years in university, the university paid his medical fees. After graduation, he applied for aid from the hospital’s welfare department.

He suffered from repeated abdominal pains in 2020. A test found that he had colon ulceration and intestinal perforation and needed emergency surgery. And now, he needs an ostomy bag. The doctor informed him that he would need intestine repair medication if he wanted to stop using the ostomy bag. The medical fees for a year cost RM22,415.

Seshugan Rao’s father was a taxi driver, but he was immobilised after a stroke. His mother is a housewife who also works part-time to ferry school children to schools. He has siblings aged 25, 23 and 18, who are in their tertiary educations.

Although he is a programmer, he must frequently be on leave for the treatments. His employer allowed him to work from home, but he only earns RM2,000 a month. He is hardworking and works part-time as a tuition teacher on weekends to earn extra income to support his family.

After reviewing the case following a home visit, One Hope Charity decided to assist in raising RM22,415 for his medical fees. His family agreed to fully authorise One Hope Charity to take charge of the fundraising and collect the donations from the well-wishers on their behalf. For questions, call One Hope Charity’s hotline at 016-419 2192 or 019-232 2192.