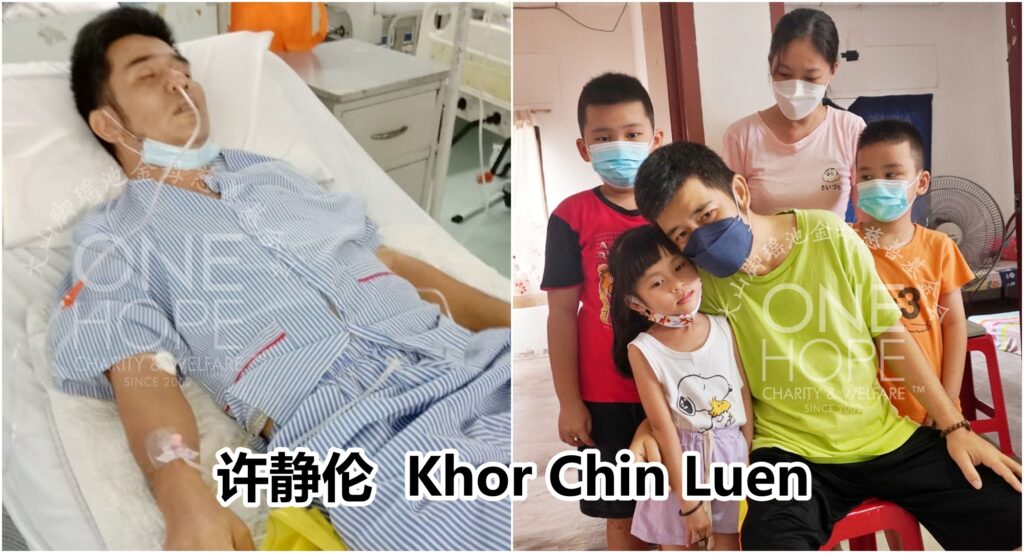 Khor Chin Luen, a 43-year-old electrician, suffered abdominal pain in August last year and was later diagnosed with stage four colon cancer. He can’t continue working to support his family after the surgery to remove a portion of his large intestine. He also started chemotherapy to fight against cancer.

When he had abdominal pain, he first went to a private clinic for an examination and a scan, and the doctor referred him to the hospital for a detailed test. His large intestine has a tumour, so the doctor arranged surgery to remove about one-foot long of his large intestine. He later started chemotherapy, and his condition was under control.

In May this year, he had another abdominal pain, and a 6cm tumour was found next to his bladder. It was confirmed that the cancer cells had spread to the bladder, so he started 12-course chemotherapy. However, his stomach developed pus, and it ruptured during chemotherapy. Therefore, the doctor suggested he postpone the chemotherapy.

Now that the tumour has expanded to 14cm and sized like a fist. The tumour can no longer be removed by surgery, so the doctor proposed radiotherapy and chemotherapy, and both treatments are now running concurrently.

Chin Luen from Bukit Mertajam, Penang, has been in and out of the hospital frequently since he was diagnosed with cancer. He can’t work anymore. The family has been relying on his savings for the past year, but not many are left. His four children, aged 14, 10, seven and six, might face the risk of running out of food, so the family is distraught.

【Chin Luen is worried about his disease on the one hand and the financial burden of the family, as well as the life of his wife and children, on the other hand, so he has to be thick-skinned and seek help from relatives and friends】

Chin Luen was an electrician, earning about RM2,000 a month before he fell ill. His 42-year-old wife is a housewife. The couple has four children – a 14-year-old son, who is in Form Two, a 10-year-old son and a seven-year-old son, who are in primary school, and a six-year-old daughter, who is studying in kindergarten. Although they are not well-to-do family, but they have built a happy and complete family for their children.

The family of six lives in a village house. In the past year, they have been relying on their savings and help from relatives and friends to live. And now, the family is impoverished. Due to financial constraints, the children have suspended their tuition classes. Finally, on the recommendation of their friends, they turned to One Hope Charity for help.

After reviewing the case following a home visit, One Hope Charity decided to assist in raising RM60,000 to serve as the living expenses, medical fees, transportation and miscellaneous expenses for the family of six for a year. The organisation hopes that the help can strongly support Chin Luen so that he can focus on his cancer treatment.

His family agreed to fully authorise One Hope Charity to take charge of the fundraising and collect the donations from the well-wishers on their behalf. For questions, call One Hope Charity’s hotline at 016-419 2192 or 019-232 2192.