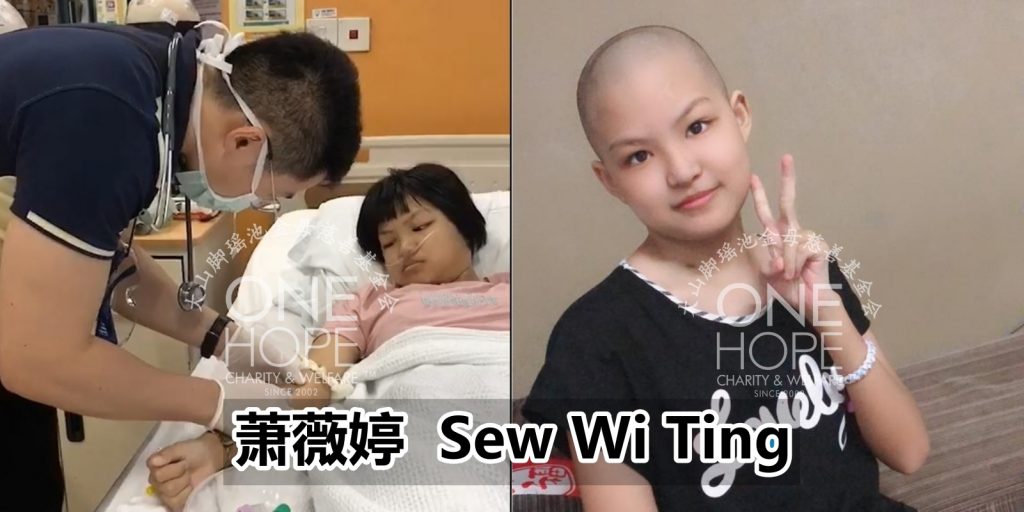 When given the choice between life and survival, how would you choose?

Single mother Goh Cheng Gaik, 48, had been working on three jobs to raise two of her children, but her 14-year-old daughter Sew Wi Ting showed signs of fever and vomit, which was later diagnosed with leukemia. The mother had to make a tough decision to either work to feed the family or focus on giving treatment to her daughter. If she had to go for the former, her daughter's condition may worsen; choosing the latter, and she would have to lose her job.

In this Catch-22 situation, she chose to save her child, but had to seek aid from here and there. Through contacts, she got in touch with One Hope Charity and through home review, the Association agreed to help the family and aided them with two year’s worth of life expenses.

Wi Ting’s treatment is still ongoing, and until now, her chemotherapy session has been undertaken by government hospitals. Medical fees for follow-up treatments will be aided by One Hope Charity, in an effort to ease the family’s burden.

【Daughter battling cancer with a smile, and her single mother is glad】

Wi Ting had been repeatedly vomiting and having fever, but when she was confirmed to have leukemia, she faced her battle to recovery with a smile as the doctor said her chance of recovery is 75%.

The Form 2 student’s favourite foods are snacks and soda, especially instant noodles. But the signs of sudden fever, vomiting and pale look on her face worried the mother and immediately took her for medical checkup. On March 27, the doctor noticed her white blood cell count was critically low, and was immediately sent to Penang General Hospital for treatment.

Further examination confirmed that the patient has leukemia. Wi Ting found herself waking up in an ICU ward. Her body covered with tubes and medical machines by her side has scared her and hoped to find mother in her current state.

Wi Ting’s most afraid of is to remove her bone marrow and her fear of needles makes her suddenly awakened even under semi-anaesthetic state. However, she had to only cooperate with the doctor in a series of chemotherapy treatments.

She happily said that she would get to enjoy her favourite food once more after her treatment is over, even if it means having hair loss as side effects of her chemotherapy treatment.

She stayed in the ICU ward for a week before being discharged, followed by chemotherapy treatment once every two days.

After completing her treatment, the doctor needed to remove her bone marrow to examine her cancer cells before determining her next step of treatment. It is expected that her treatment would last two years.

Goh Cheng Gaik got divorced 8 years ago. She single-handedly raises two daughters. She had been working for 3 jobs, namely selling cakes in a market between 6 am to 8 am, as a clerk between 8.30am - 5 pm and an assistant from 6 pm - 10 pm, just so that she could make ends meet for her two daughters.

She is determined to raise her children up and see her daughter graduate from high school before letting go of two of her side jobs. Her main work was a clerk with a monthly income of RM1,900. Her elder daughter worked in a milk tea shop with a salary of RM1,800, but her income went through cuts due to the MCO. She lost her job in June this year.