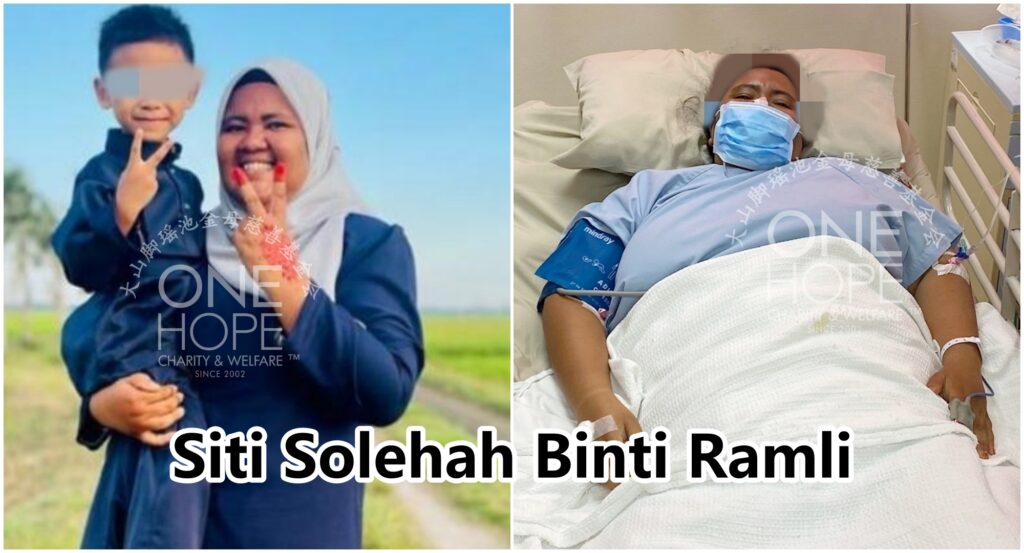 A Malay woman has been working hard to support her family. In order to make a living, she chose to continue working even though she experienced headache for many days. Unexpectedly, she suffered a sudden stroke a few days ago. It is a race against time, and she needs to undergo mechanical thrombectomy within the golden window, but her family cannot afford the shortfall of RM50,000 in surgical fee.

27-year-old woman Siti Solehah Binti Ramli from Kepala Batas in North Seberang Prai, was weak and fatigue in the early morning of 25 January 2022. She suffered from severe pain in her body at around 9.30am and she cried out for help. Her cousin brother heard the cries and called an ambulance immediately to send her to the hospital.

After the examination, the doctor confirmed that she had a cerebral hemorrhage and she needs to undergo mechanical thrombectomy as soon as possible to minimise the damages to her brain, as well as to reduce the sequelae of stroke.

Her condition was urgent at that time but mechanical thrombectomy required some expenses. At that time, her younger sister only had RM10 in her pocket, so her family could only borrow from their relatives. They managed to raise RM9,000, but there was still a shortfall of RM50,000.

The family approached One Hope Charity for help. Given that Siti Solehah is still young, there is a high chance of recovery if the surgery is performed in a timely manner. Therefore, One Hope Charity approved the case quickly so that she can undergo the mechanical thrombectomy as soon as possible.

When the team from One Hope Charity visited her in the hospital recently, her younger sister Nur Syafiqah Binti Ramli told the volunteers that her sister was always healthy but she has been complaining of headaches since about two weeks ago but she just tried her best to bear with it. Unexpectedly, she suffered a stroke on 25 January 2022.

Siti Solehah is a chef, but she lost her job during the Movement Control Order (MCO). She finally found a stable job two months ago with a daily wages between RM30 and RM60, depending on the traffic of the restaurant.

Her 53-year-old mother Sharifah Binti Md Adnan also said that after her husband died of a heart attack four years ago, Siti Solehah became one of the sources of income of her family and she herself works as a cleaner at a university in North Seberang Prai earning RM1,100 a month. During the MCO period, she became the sole breadwinner of the family until recently when Siti Solehah found a new job. However, Siti Solehah endured headache but still went to work without saying anything which resulted to the sad incident.

Siti Solehah’s 30-year-old brother Muhammad Izzat Shameer is an odd job worker with unstable income. Her 22-year-old sister Nur Syafiqah was a salesgirl but she was forced to quit her job during MCO. After that, she got married and settled down in Sungai Petani with her husband.

After reviewing the case, One Hope Charity decided to help her in raising the shortfall of RM50,000. Her family agreed to authorise One Hope Charity to take charge of the fundraising and collect donations from the well-wishers on their behalf.