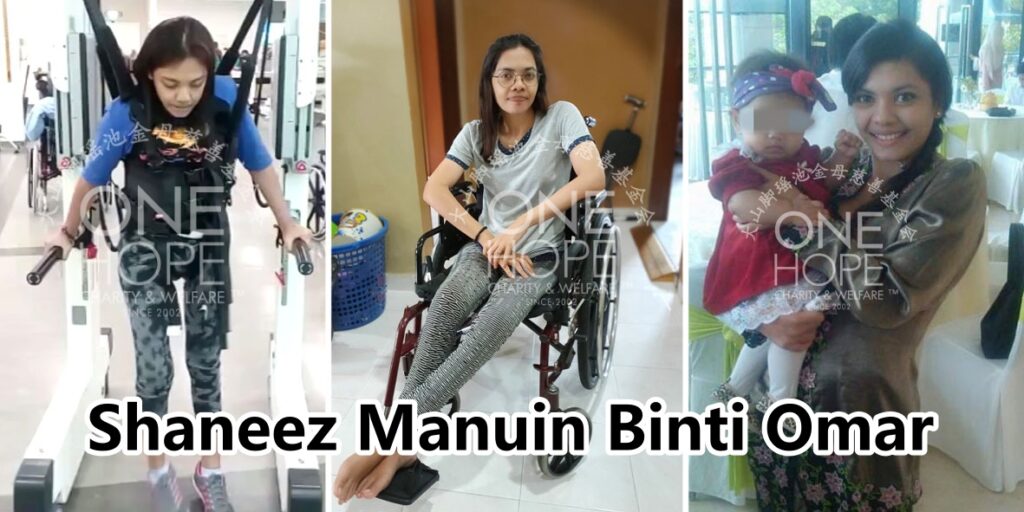 A 37-year-old woman who was originally healthy and had a happy family suddenly suffered from multiple sclerosis (MS) five years ago. And now, her legs are weak and her hands are trembling constantly. Her husband has abandoned her and their daughter due to the disease of unknown aetiology.

Shaneez Manuin bt Omar from Kulim, Kedah, suffers from multiple sclerosis (MS). In the past five years, she started with frequent falls, and now, her feet are weak to the extent of being unable to walk. Currently, she needs to rely on a wheelchair to move around, and her hands are weak and tremble constantly making her difficult to eat and write. Due to this disease of unknown aetiology, she was abandoned by her husband and now lives with her parents and her only daughter.

This is an incurable disease that needs to rely on medication to slow down the deterioration. The doctor suggested her to receive Rituximab injection for half a year, which cost a total of RM58,063. The government’s medical fund will provide aid of RM22,352, and she hopes that One Hope Charity can assist her with the remaining RM35,711.

【She once thought about giving up her life. It was her daughter who made her mentally strong. She wants to survive and her biggest hope is to resume her daily life】

One day in 2017, Shaneez Imanuin suddenly could not walk steadily, and the same thing happened again the following year. After visiting an orthopaedic specialist at a hospital, the cause of her symptoms failed be determined, so she was referred to the neurological department of the Alor Setar Hospital for examination, and the result showed that she was suffering from multiple sclerosis. She was the first case of multiple sclerosis at Kulim Hospital, and she was being arranged for treatment at the Seberang Jaya Hospital.

In the beginning, she was able to take care of herself, but eventually, she started to need someone to take care of her as she may occasionally lost her balance and fall. Her hands and feet were out of her control, and she was unable to work. The Social Security Organisation (SOCSO) arranged her for a three-month physiotherapy at a physiotherapy centre in Melaka, and she started to learn to use a wheelchair to move around. At the centre, she came into contact and witnessed various unfortunate cases, and she also received counseling there, which allowed her to overcome her negative thoughts.

She was forced to quit her job in 2017, and barely survived with a monthly aid of RM975 from SOCSO, which also provided her five packs of diapers every month.

In 2019, she had relapsing-remitting multiple sclerosis (RRMS), and in 2020, it evolved into secondary progressive multiple sclerosis (SPMS). Her condition deteriorated day by day. Since 2021, her arms, legs, body and face always experienced tingling and numb sensation, her head and hands tremble constantly; both her hands and feet are weak and she needs to rely on a wheelchair to move around.

Shaneez Imanuin was a clerk with a salary of RM1,200. She had a husband and a daughter, and they used to have a happy family. However, this disease caused her family to break up, and her husband left home without providing any alimony. She is now living at her parents’ home with her seven-year-old daughter, and her elderly parents are taking care of her.

Her 77-year-old father Omar bin Gulam worked in a sugar factory before his retirement, and her 73-year-old mother is a retired Agriculture Department staff, and currently receives a pension of RM1,200 a month. The elderly parents are worried about the medication costs that Shaneez Imanuin needs for a year.

The elderly parents hope that One Hope Charity can help their daughter with her medications. The incurable disease has left the parents devastated, and they are helpless with the huge amount of medication costs. After reviewing the case, One Hope Charity decided to assist Shaneez Imanuin in raising the RM35,711 in medical fee. The family agreed to authorise One Hope Charity to take charge of the fundraising and collect donations from the well-wishers on their behalf.