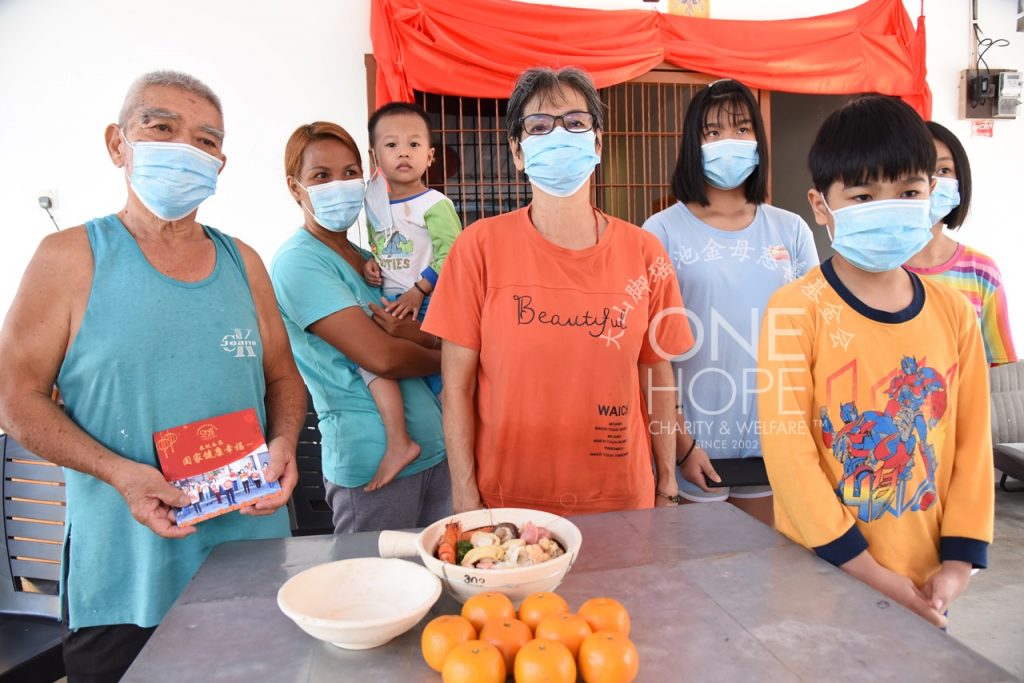 Four kids have been placed under the care of their grandparents after the death of their father three years ago. The grandfather and sole breadwinner, who needs to fight cancer, could not stop worrying about his grandchildren. He hoped to raise RM90,000 for the living expenses as well as for their grandchildren’s education.

Three years ago, an elderly man from Berapit, Bukit Mertajam not only had to bid farewell to his son who was killed in a car accident, but now had to take care of four of his grandchildren.

To date, Tan Ah Kow, 69, had been diligently taking care of his grandchildren, but he was recently diagnosed with prostate cancer.

“I can bear the pain of my cancer, but I cannot starve my grandchildren… what should I do?”

Tan needed time for himself to fight his cancer, but being the sole breadwinner of the family, he constantly had to worry about the lives of his four grandchildren. Hence, he approached One Hope Charity & Welfare to raise RM90,000 of donation funds, which would be used for the life and education expenses.

Tan formerly worked as a hawker selling beverages and he initially had hoped to enjoy his retirement. However, after having to face the death of his son in 2017, he works as a cashier, earning a monthly income of RM1,000 with an extra RM300 welfare fund. The family of his wife, his Thai daughter-in-law, and his four grandchildren rely on the hands of Tan’s hardwork and dedication.

Sadly, in November last year, Tan went for a medical checkup at a hospital after noticing that he could not urinate. He was later diagnosed with prostate cancer. His biggest concern was not of his cancer, but the fate of his four young grandchildren.

“If something were to happen to me, what would my grandchildren do?”

Tan’s wife, 67, had been missing his son for the past three years, but after discovering that her husband was diagnosed with cancer, her mind was not in peace.

As for their Thai national daughter-in-law, she was unable to secure a job as she needs to extend her visa every year. In addition to her children, she and her whole family have been living a frugal life.

【Aiming to provide education for the young】

The name and age of Tan’s grandchildren are: Tan Ping Siew (15), Tan Ping Ping (12), Tan Bin Tai (11) and Tan Kok Tai (4). Tan Ah Kow’s hope was to be able to give proper education to his grandchildren, watching them grow up and be independent.

After discussion with Tan, One Hope Charity would initiate a fundraising campaign to raise RM90,000 for the family, she covers the living and educational expenses. At the same time, One Hope Charity has also sponsored a tablet computer to the eldest grandchild Tan Ping Siew.

The moment when the 15-year-old received the tablet, she expressed her joy through tears and thanked the association for their aid.

For the past 3 years, the Association has provided food supply to aid the Tan family, including during the Movement Control Order period. Because of Tan Ah Kow’s medical condition, he hoped to request financial aid from the Association.