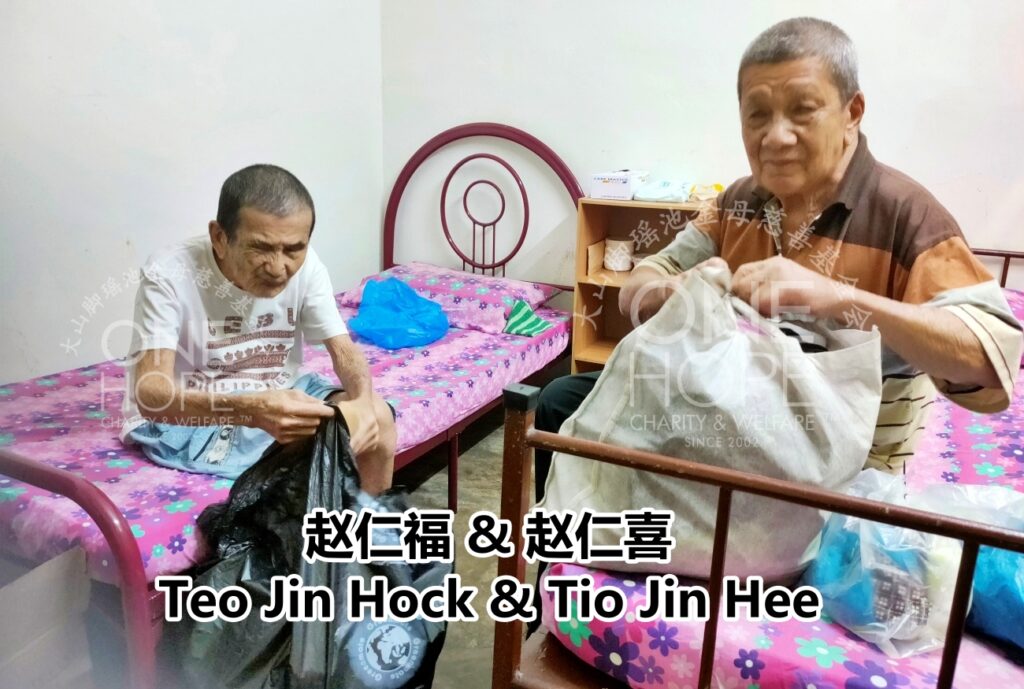 76-years old Teo Jin Hock, also known as Hock Pek, and his 69-year-old brother Tio Jin Hee, or B Cik, have been living in a wooden house in an oil palm estate in Bukit Teh since they were small. In the past, the duo took care of each other and usually fed on food given out for free by a Malay restaurant owner nearby.

Jin Hock was admitted to the hospital for almost two weeks due to Covid-19 early this year. After he recovered, Jin Hock was sent to a nursing home after his vision deteriorated and he became partially blind, his feet were weak, and he was unable to walk. At that time, One Hope Charity assisted with his expenses at the nursing home.

On the other hand, despite knowing he cannot care for his elder brother, partially blind brother Jin Hee longed for Jin Hock's return to their wooden house. He was reluctant to relocate to the nursing home. Still, as Jin Hee's health deteriorated after living alone for a few months, he decided to follow in the footsteps of his elder brother and moved to the same nursing home.

【The two brothers love and care about each other very much. Although they seemed at odds, they always had each other in their mind. While living apart, they would miss each other from time to time. After a few months of separation, they finally lived together again, but they were a little shy when seeing each other】

The brothers are from Bukit Teh in Machang Bubuk, Bukit Mertajam. They had been living in their old wooden house on an oil palm plantation since they were born. After their parents and other siblings' passing, the duo relied on each other. In the past, they didn't seem to care about each other, but blood is thicker than water. They later started to care for each other. When they were still healthy, they would ride a motorcycle and settle their meals at nearby restaurants.

Until the legs of Jin Hock became weak and couldn't walk, the younger brother would ride to the Malay restaurant outside the oil palm plantation to collect free food. Some good neighbours who cared for them packed food for them occasionally.

Unfortunately, Jin Hee often felt unwell recently. One of his eyes also had blurred vision, and he couldn't see clearly. Jin Hee worried that accidents might happen if Jin Hee continued living alone. Therefore, he started considering moving to a nursing home to continue living with his brother again.

After reviewing the case following a home visit, One Hope Charity decided to raise a symbolic fund of RM72,000 to cover the nursing home expenses of the two brothers. Although the fund is only enough for two years, One Hope Charity pledges to support the two elder brothers until their dismissal.