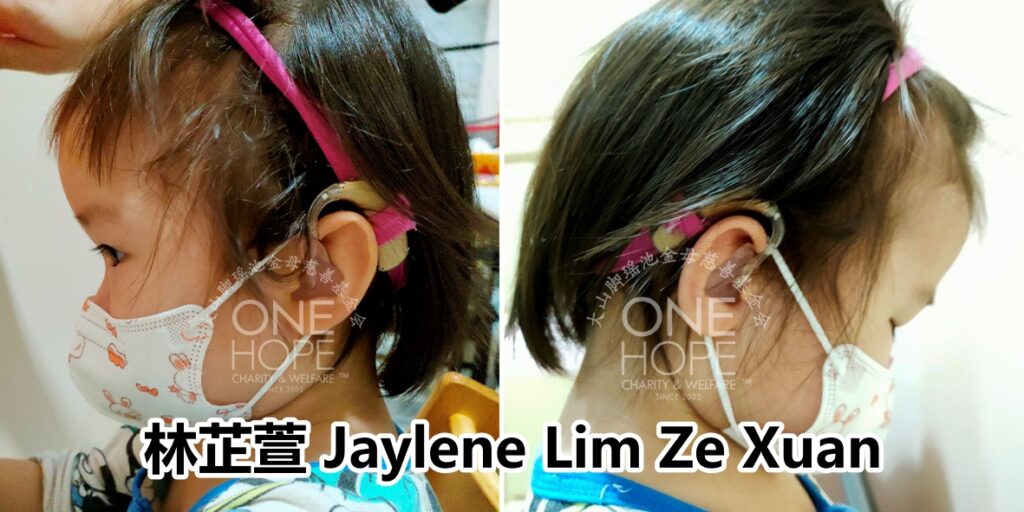 ***A total of RM20,000 from the “emergency medical reserve fund” has been channelled, hence, One Hope Charity will only launch a fundraising of RM145,000 for this case.***

Two-year-old Jaylene Lim Ze Xuan looks cute and lively but has a hearing impairment. She does not know how to pronounce “Dad” and “Mom”; her hearing ability is only 20%. Her deaf parents actively took their daughter for medical treatment, and the doctor confirmed that the girl was suitable for cochlear implant surgery. However, the parents are worried as they cannot afford the substantial medical expenses.

Jaylene is from Subang Jaya, Selangor. The parents prayed to God for a miracle after discovering their daughter had a hearing impairment. They were once overjoyed when the toddler responded to some traces of voice, but her condition remained the same after nine months. In order not to delay their child’s learning progress, the deaf parents begged the public for help so their daughter could undergo a life-changing surgery to regain her hearing ability.

【The two-year-old sister and her four-year-old brother did not respond to sounds since they were young. The hearing tests showed that the siblings' hearing abilities were less than 20%, and they were wearing hearing aids. Fortunately, the sister is suitable for cochlear implant surgery in both her ears】

During the prenatal examinations, baby Jaylene seemed normal. The parents were excited to welcome her arrival. Baby Jaylene was born safe and healthy. The parents wanted to give the child a better environment for language learning, so they sent her to the grandparents since she was a baby.

Unexpectedly, the grandfather discovered that the then one-year-old girl was not responding to sound, so he brought her for a hearing test. The result was not good, showing that the girl’s hearing ability in both ears was just 20%. The doctor suggested she wear a hearing aid. She started wearing a hearing aid leased from a supplier a year ago.

On the other hand, the doctor confirmed that little Jaylene is suitable for cochlear implant surgery in both her ears. However, the overall medical expenses cost RM175,300, the family can only afford RM10,300.

Both her parents are deaf. Her 34-year-old father, Lim Wei Loong, usually communicates through sign language. He works as a chef in Singapore, earning S$2,900 a month. He sends money home every month to pay for his family's living expenses. Her 33-year-old mother, Lim Jo Lene, was sent by her family to a school for the deaf and mute in Singapore to learn literacy since she was a child. She also trained for lipreading. She lived and worked in a cake shop in Singapore for 11 years and resigned and returned to Malaysia five years ago to care for her sick mother.

Jo Lene and her husband have a four-year-old son and a two-year-old daughter. Currently, she sells homemade cakes online from her house in Subang Jaya to help the family’s income. The parents cannot afford the substantial medical expenses; hence, they approached One Hope Charity for assistance so that Jaylene can regain her hearing ability.

After reviewing the case following a home visit, One Hope Charity decided to assist in raising the medical expenses of Jaylene needed. Her family agreed to fully authorise One Hope Charity to take charge of the fundraising and collect donations from the well-wishers on their behalf.