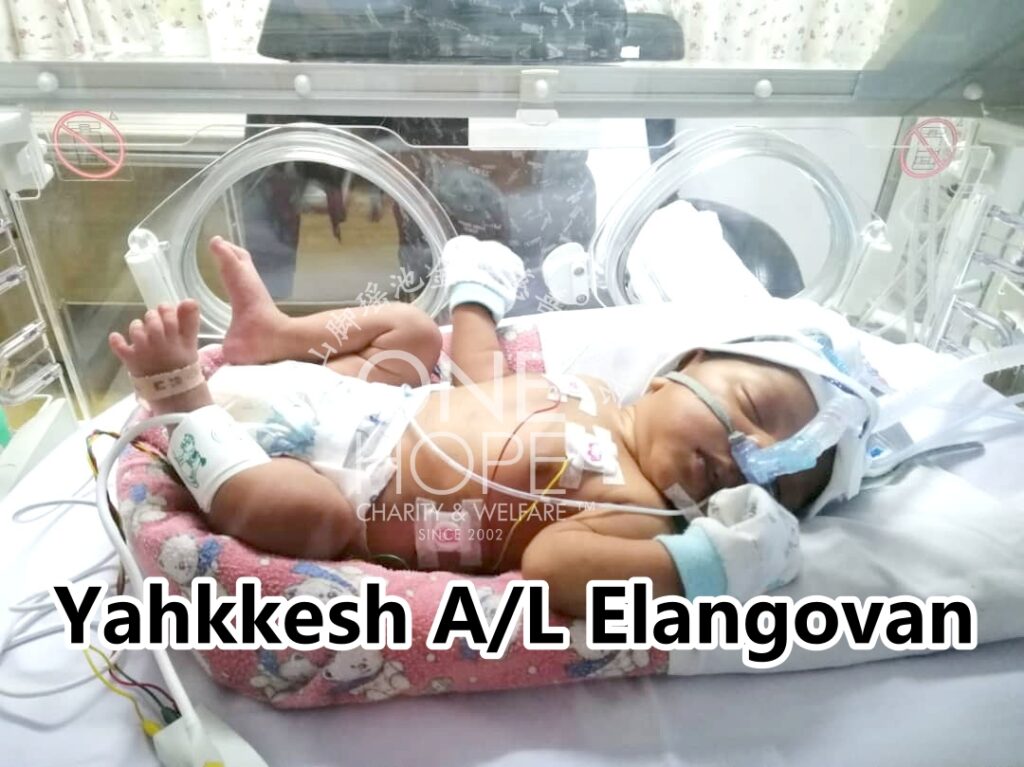 The birth of a New Year baby is something worth celebrating but a mother experienced breathing difficulty at the time of delivery and the baby boy was born in respiratory distress. Both mother and son were sent for emergency rescue; the mother was saved but the baby boy was diagnosed with transient tachypnea of newborn (TTN) and pneumonia, and he needed to undergo treatment in a special incubator.

Baby boy Yahkkesh A/L Elangovan from Sungai Siput in Perak, needs to be treated with DuoPap Machine to survive but this equipment is only available in Raja Permaisuri Bainun Hospital in Ipoh and specialist hospitals. However, there is no extra equipment in the government hospital. His father cried and begged the doctor to save his child, and agreed to transfer to other hospital so that the child can be saved.

The baby boy needs to be treated in a special incubator for two to three weeks, and the medical fee is expected to be RM40,000. His father does not have extra money and can only afford RM2,000. He is still short of RM38,000 in medical expenses, hence he seeks for public donations.

【The mother had breathing difficulty during labour and the baby also experienced respiratory distress. The mother and son were once in danger. The father collapsed and begged the doctor to save his wife and child】

When Saraswaty A/P Murugesen was nine months pregnant, the doctor informed that she had polyhydramnios, and the foetus grew too fast, therefore, she might need a caesarean section.

On 1 January this year, the mother experienced labour contractions and was sent to the hospital. During the labour process, she suddenly had difficulty in breathing and needed oxygen assistance. In addition, the doctor was worried that the baby would inhale the meconium, hence, the mother was given a caesarean section. The baby was born with dyspnoea and was rushed to the intensive care unit. The baby boy needed a DuoPap machine to support his breathing.

The doctor estimated that the baby would need to be treated in the intensive care unit for at least two weeks, and the parents are still short of RM38,000. The father told the doctor frankly that he was unable to pay the medical bills, and he cried and begged the doctor to allow the baby to be discharged. The baby’s condition was critical and the couple had no other choice but to approach One Hope Charity for help.

The baby’s 41-year-old father Elangovan A/L Ganeson is a technician with a salary of RM2,050. His 35-year-old wife, Saraswaty A/P Murugesen is a housewife. The couple also has a two-and-a-half-year-old son.

After reviewing the case, One Hope Charity decided to help the baby boy in raising the RM38,000 in medical fee. The family agreed to authorise One Hope Charity to take charge of the fundraising and collect donations from the well-wishers on their behalf.