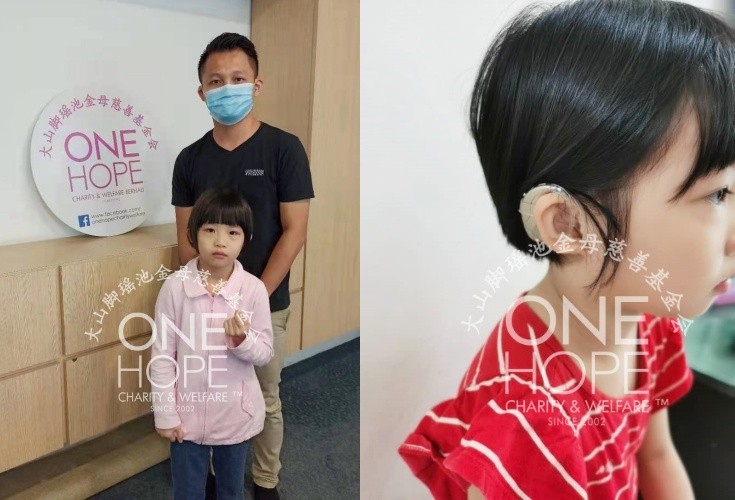 Both the mother and father are deaf-mute, but their child’s hearing and language abilities are fine. However, her right cochlea was not completely developed which caused her impaired hearing. She requires an artificial cochlea implanted to resolve her problems, and the family needed RM98,000 for the expenses, hoping for their child to be able to listen to the world.

The deaf-mute family from Johor gave birth to You Yik Hang, who is now seven years old. After a medical examination, their child was not deaf or mute, and has normal hearing and speaking abilities. As the parents were concerned that their disabilities would affect their daughter’s speech development, Yik Hang was taken under her grandmother’s care.

Because Yik Hang’s father is a deaf-mute, her grandmother paid special attention and care for her granddaughter. When Yik Hang’s is one-year-old, the grandmother noticed that she was facing speech and hearing difficulties, hence she took her to the hospital for further examination.

The doctor discovered that her right cochlea was not developed properly, hence she needed hearing aid to improve her hearing abilities.

As she grew older, her family found out that Yik Hang’s hearing aid did not improve her hearing abilities and her speech development was at a grinding halt. Furthermore, she could not catch up with her homework among other students in school.

Yik Hang’s who’s now in Standard 1, can only say a couple simple phrases and express them with gestures. Her aunt worried that she would gradually lose her hearing abilities in the long run, along with her speech development, hence Yik Hang was taken to a specialist hospital for further examination.

After a clinical checkup, the doctor said that Yik Hang’s needed a suitable artificial cochlea implant.

Yik Hang’s father You Deng Hui, 37 is a deliveryman with a monthly salary of RM1,800 where her mother Yeo Huei Hoon works as a clerk, with a monthly income of RM1,000. Apart from Yik Hang, they are also taking care of two sons, aged 6 and 1.

The family was unable to pay the huge expense of RM98,000 for the artificial cochlea, hence they approached One Hope Charity to seek aid and hope that the public could help them raise the needed funds.

After review through home visits, the family agrees to hand over all the fundraising activities to One Hope Charity and at the same time, collect donations from the general public.