Her chemotherapy sessions have started. She has to face the side effect of hair loss and she is unable to exercise due to the treatments. Although Darshenni had complaints at first but after getting some enlightenments from her mother and support from the family, she is now actively fighting against the cancer.

The RM168,000 treatment fee needed by 13-year-old Darshenni has been successfully raised. Hence, the fundraising will stop immediately.

She faced hair loss due to the treatment, and the active girl is now unable to exercise. During the initial period, Darshenni had always asked her mother why she could not exercise, why the other children in the hospital had hair loss, why she became sick and many other questions.

Although her mother felt sad after listening to the questions, but to show her love towards her daughter, she cut her hair short with her daughter; and she also prepared to go bald anytime with the daughter.

Her mother has been comforting her, telling her that she only needs to go through the 10-month treatment period and her life will resume as normal after that. The family of five also prayed devoutly, hoping that the girl, who is suffering from illness, could recover and grow up happily and healthily.

Darshenni needs to undergo oral and IV chemotherapy of all-trans retinoic acid (ATRA) and arsenic trioxide (ATO) every week for eight months. We wish Darshenni a speedy recovery and could resume her normal life soon after that.

Earlier, her parents were worried about the huge amount of treatment fee needed by their daughter. The weekly chemotherapy cost is as high as RM10,500. They finished up their savings, but they still could not afford the high medical fee. Therefore, they are very grateful to One Hope Charity for offering immediate assistance, and they are even more thankful to all the well-wishers for the donations, so that their family could temporarily overcome the difficulties and save their daughter. Many thanks! 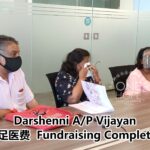 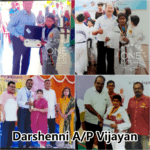