After the wife and daughter cleared all their doubts, they finally decided to let Tan Kong Aik undergo surgery to reattach his bone flap. The RM65,000 surgical fee he needed had been successfully raised. Hence, the fundraising will stop immediately; and the surgery date is also under arrangement.

His wife, Ooi Choon Hua said that it was not an easy journey for her husband to accept the fact of him being paralysed. He even gave up himself at the beginning and refused to eat. After consistent encouragements and supports from the family, he slowly accepted his condition and began to receive treatment, such as physiotherapy, and his condition showed great improvement.

Recently, as Kong Aik often attacked by seizures, his wife and two daughters must take turns taking care of him day and night, as they are worried that he might be in danger. The family hopes that he could take care of himself after the surgery, so that the daughters could go out to work to support the family.

“The doctor told me that after the surgery, Kong Aik has a chance to recover, and might even have chance to walk and resume his daily life. I would like to thank everyone for your kind donations. We are really helpless without you.” 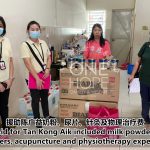 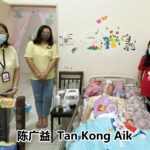