‘Thank you for donation from all the generous people. I will not give up to fighting with the illness and I will receive treatment and bone marrow transplant.’

A 25-year-old young man, Lim Chee Yew, suddenly suffered from leukemia and urgently needed RM230,000 for a bone marrow transplant. After ONE HOPE CHARITY helped him to raise funds on the 13th of this month, donations are steadily coming in. At present, the required fund of RM230,000 is already raised completely. ONE HOPE CHARITY will stop fundraising for him from now on.

Lim Chee Yew was an auditor before he diagonsed leukemia. He plan to get married with his girlfriend and repay his parents after working for a few years. However, after he was diagnosed with leukemia in April this year and thus he needed to perform a series of treatments.

He suffered the sequelae caused by chemotherapy, such as hair loss, depression, skin irritation, and acute fever and more. He had overcome all of this.  However, the chemotherapy failed to achieve the expected results.

In May, due to repeated fevers, the doctor found that the cancer cells in his blood had increased after chemotherapy. Therefore, doctor was recommended him to undergo a bone marrow transplant.

Lim Chee Yew’s chemotherapy has been completed. If the cancer cells in his blood maintain in a stable condition level, the doctor will perform a bone marrow transplant for him in January or February next year.

Lim Chee Yew and his family are very grateful to all the enthusiastic people for their donations. Now he is worry free about the big amount of medical expense and continue to fight against the illness. 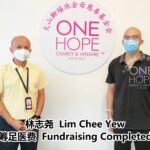 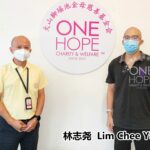