Congratulations, finally the micro preemies babies were discharged from the hospital. Generous people give supports and blessing so that this premature twin sisters could stay in the incubator until they reached the standard of weight. Now, the sisters have been discharged home from the hospital.

The twin sisters, Nirusha and Nilesha from Shah Alam were being born too early as only 24 weeks gestation on 5 March 2021. The elder sister Nirusha weighed only 595 grams, and younger sister Nilesha weighed only 585 grams. They were considered as micro-preemies, as tiny as an adult’s palm. Many organs were underdeveloped, and their skins were extremely red.

The premature twins required regular medical care and evaluation. Therefore, they must stay in the incubator until the organs are fully developed. At that time, the double joy turned into terrified because of the early delivery of the two children.

On 5 May 2020, the weight of the twin sisters has increased to about 1 kg. Then, the elder sister Nirusha's weight reached nearly 2 kg, and the doctor approved her to be discharged from the hospital on 1 June 2021. In 25 days later, the younger sister Nilesha was also allowed to be discharged.  Nilesha’s weight had reached 2.6 kg.

The parent of babies, Kasturi and Jegan, are grateful to all the generous people and entrepreneur that provided kind deeds for them regardless of race and religion. It gives support and power to this novice parents when they facing the challenge of early delivery of their children.

‘I believe that Nirusha and Nilesha can grow up healthy in the future, and this is blessing from generous people.’ says by the mother. 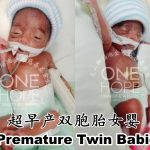 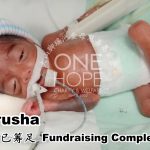 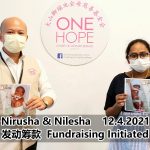