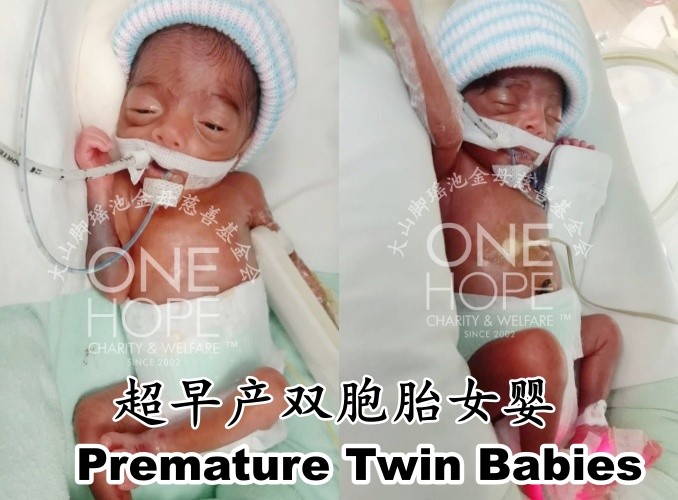 A pair of micro-preemies urgently need your help and support. They only have been inside their mother’s womb for 24 weeks and they only weigh just over 500g ! The newborn twin is in need of RM120,000 to save their lives.

After being married for three years, the couple finally got their first child, and it is a twin. The whole family were happy to welcome their new family members. Unfortunately, the twin girls were born after 24 weeks of gestational age. Both weighed slightly over 500 grams and needed to stay in the incubator. What was supposed to bring double the joy had instead turned into double the frustration.

The Indian couple have waited long for their next generation and they were delighted to hear that the mother was conceived with a twin. But what worries the new parents now was that the twin sisters were born prematurely.

Kasturi A/P Veerakumar, 31, from Shah Alam married to her husband Jegan for the last three years and have waited for the special moment to come. Sadly, the journey for Kasturi’s journey in her pregnancy period was not a smooth sailing. In her third month of pregnancy, she was diagnosed with gestational diabetes, hence she had been extra careful with her diet during pregnancy, in hopes that her twin daughters can grow up safely and healthily.

On the 23rd week, when Kasturi performed another scan, the doctor found out that one of her child’s head is facing downwards, which shows the possibility of being born prematurely. Hence, the doctor requested her to stop work immediately and admit to hospital until she is ready to give birth.

Unexpectedly, days after admitting in the hospital, she began to have abdominal pain, hence the twin girls were delivered to this world on March 5 after the gestational age of only 24 weeks.

After the babies were born, the elder twin sister Nirusha weighs only 595 grams whereas her younger sister Nilesha weighs 585 grams. Both are categorised as micro preemie. Their bodies were around the size of a normal adult palm. Many of their organs have yet to fully develop and their skins were red as if they were transparent.

The micro preemie twins not only need to be taken extra care, but also required to identify even the most minute changes. Hence, they are required to stay in the incubator until their organs are fully developed before being allowed to leave.

The elder twin Nirusha was diagnosed with a hole in her heart and faced blood infections after she was born. Her younger sister, Nilesha, on the other hand is relatively stable. Today, the twins are around 30 weeks old, and their body weight increased to nearly 1kg.

Because the twin sisters must stay in the incubator until full term, the huge medical fees have heavily burdened the young couple. The medical expenses for the twin’s treatment are around RM120,000. The parents were unable to handle such a heavy amount, hence they approached One Hope Charity for help.