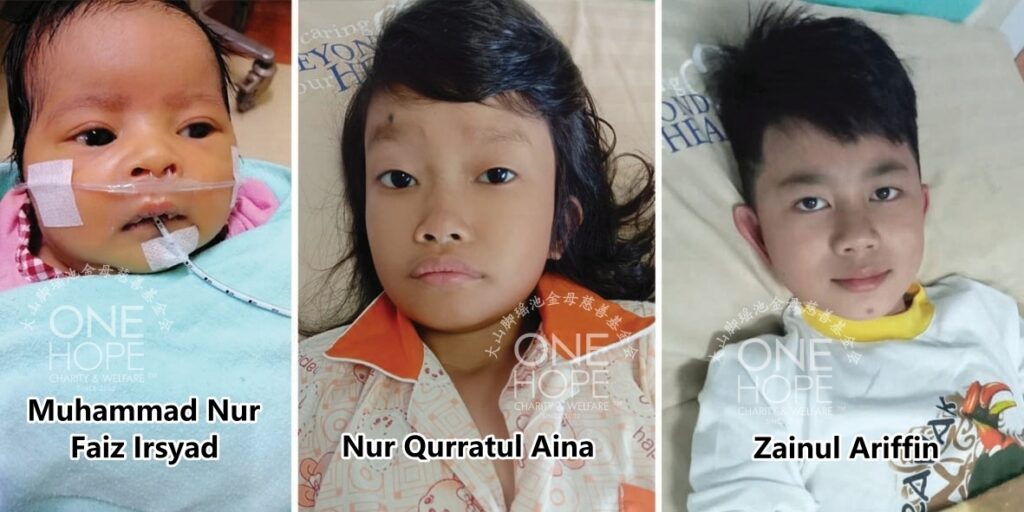 They are all the only child in their respective family and their lives are threatened due to serious heart disease, and their family members are worried about their medical fee. A four-month old baby boy, a nine-year-old girl and a 10-year-old boy need a total of RM146,000 to undergo life-saving heart surgery. The three families plead the public to donate so that their child can be saved.

Four-month-old baby boy Muhammad Nur Faiz Irsyad Bin Mohd Iqkhram from Penang was diagnosed with a serious heart disease, which lead to cyanosis. He is currently relying on medicines to control his condition and he needs a surgery to survive.

Nine-year-old girl Nur Qurratul Aina Binti Ajis and 10-year-old boy Zainul Ariffin bin Zainal Abidin are from Sarawak. They lived happily through childhood but both of them were diagnosed with heart problems during general examinations and were referred to the National Heart Institute (IJN) for treatment. Both parents were shocked to know that their child suffered from congenital heart disease and need to undergo life-saving surgery.

The three of them are the only child in their family. However, the huge amount of surgical fee have worried their parents as all of them are unable to pay for the surgical fee. They are eagerly seeking donations from the public, so that the three children can free from heart problems and continue to grow up healthily.

【Case 1: The four-month-old seems to be normal but he will become cyanotic when he cries. The heart disease may also affect his other organs and he needs RM70,000 to undergo his surgery】

Muhammad Nur Faiz Irsyad, a four-month-old baby from Juru, Penang, was found to have slow heartbeat when her mother underwent a regular full-term pregnancy examination. The mother was sent to the hospital for emergency caesarean section and the boy was born with cyanosis. He was rushed immediately to the intensive care unit and the doctor found out that he has hole in his heart and narrowed blood vessels. After staying in the intensive care unit for a month, he gradually got rid of the oxygen assist machine and was allowed to discharge.

The baby boy seems to be normal but when he started to cry, he will feel breathless, and his lips and tongue will also become cyanotic. As the baby is in critical condition, the hospital referred him to a specialist hospital. Otherwise, his heart may gradually fail and worsen his condition, and may even affect the other internal organs.

His 29-year-old father Mohd Iqkhram Bin Abd Karim is an ATM machine service technician, earning RM2,800 a month. His 30-year-old mother Nor Fazirah Binti Azme was a factory operator before marriage with a monthly salary of RM1,200. She was forced to quit her job to take care of the sick son.

His father took a month off and had been travelling between hospital and his home during the first month after his son was born. Therefore, his income was greatly affected and he is struggling even to pay their monthly living expenses. He doesn’t have extra savings to pay for his son’s medical expenses.

【Case 2: The nine-year-old girl developed fever and asthma. After the examination, it was confirmed that her heart disease has become serious. She needs RM38,000 to undergo life-saving surgery】

When Nur Qurratul Aina, a nine-year-old girl from Samarahan District in Sarawak was just one year old, a doctor discovered that she had abnormal heartbeat during an asthma treatment. She was referred to Kuching Hospital for examination and the report showed that she has atrial septal defect (ASD), or commonly known as hole in the heart. However, the doctor told her parents that she only need to be closely monitored and observed, as they hoped that the hole can be closed by itself.

In the past nine years, although the girl may encountered breathlessness and breathing difficulty after some exercise, but she will recover after resting for a while.

It was until September this year when the girl had a fever and asthma. After examination, it was confirmed that the hole in her heart did not close by itself, and she was referred to the National Heart Institute (IJN). The check revealed that the girl needs to undergo a heart repair surgery that cost RM38,000. Her poor parents are unable to afford the surgical fee, and at the same time, they are very worry about her condition.

The parents admitted that they are not well-educated and they don’t have extra money for their child’s medical treatment. They don’t even have enough money to buy air tickets to fly to West Malaysia for their daughter’s surgery; not to mention the huge amount of surgical fee. Therefore, they hope that the public can help them to save their daughter.

Her 38-year-old father Ajis Bin Madun is a waiter in a restaurant, earning about RM1,000 a month. Her 33-year-old mother Rohaya Binti Esa is a housewife.

【Case 3: The 10-year-old boy was found to have abnormal heartbeat during a routine dental check-up five years ago. He was later diagnosed with serious heart disease and urgently needed RM38,000 for surgical fee】

10-year-old boy Zainul Ariffin from Asajaya in Sarawak was normal when he was born. It was until he attended preschool at five, the doctor found out that he had irregular heartbeats during a routine dental check. He was referred to a clinic for check-up, and later referred to a major hospital. He was confirmed with cardiovascular rupture. Since then, he needs to go for follow-up visits and checks at the hospital once every three months.

The boy is unable to do excessive exercises, otherwise, he will suffer from shortness of breath and breathing difficulty, and he needs to take a rest when he has shortness of breath. Five years has passed but in early September this year, the doctor found out that his heart disease has become worse during a regular check-up and he needs a surgery to continue survive.

His 45-year-old father Zainal Abidin bin Bujang is a fisherman with unstable income but he is able to bring home about RM700 every month. His 45-year-old mother Kayah Binti Salim is a housewife. The couple has only one child. The family income is merely enough to cover their daily needs and they have no ability to afford additional expenses.

After reviewing the case, One Hope Charity decided to help the three children to raise the surgical fees amounted to RM146,000. The families agreed to authorise One Hope Charity to take charge of the fundraising and collect donations from the well-wishers on their behalf.